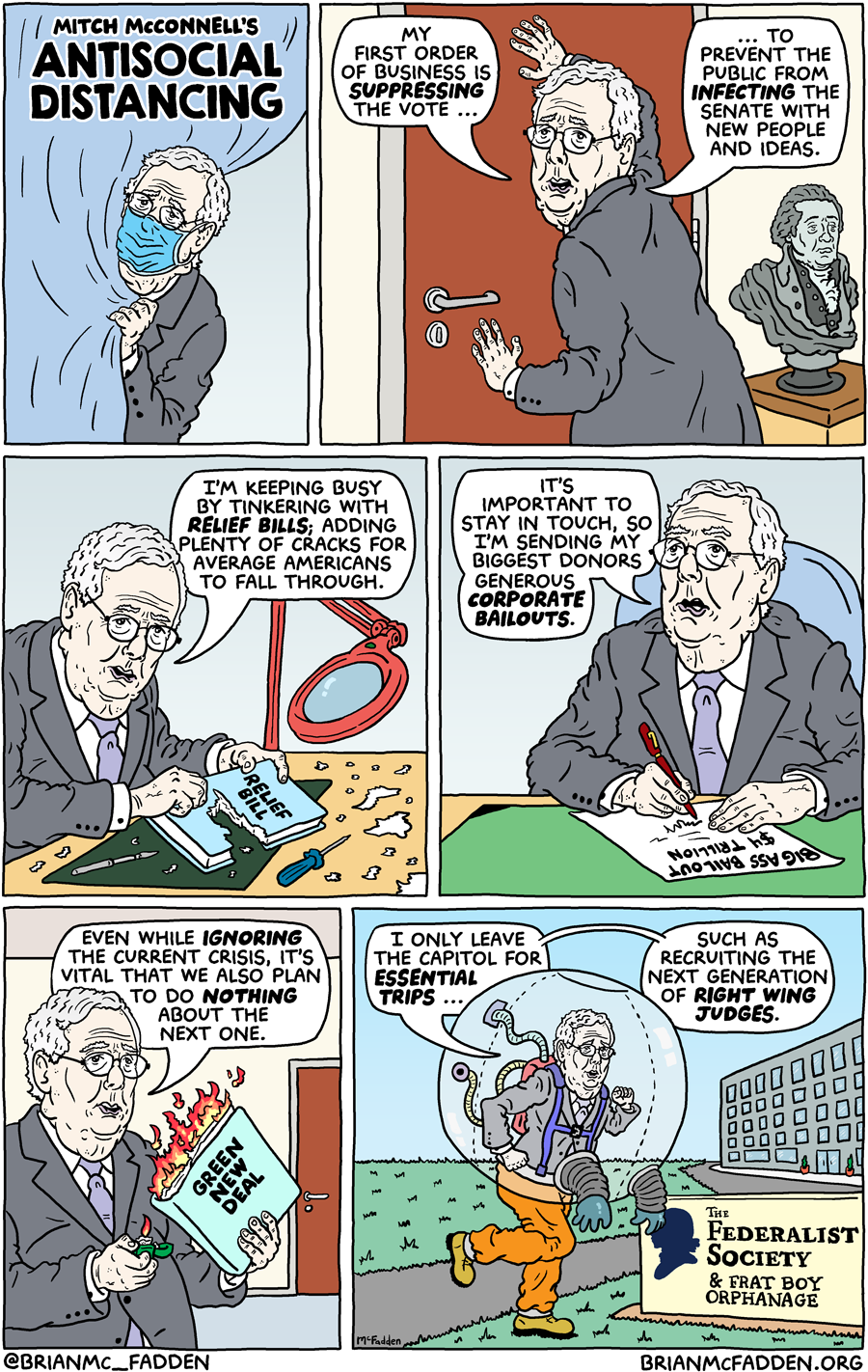 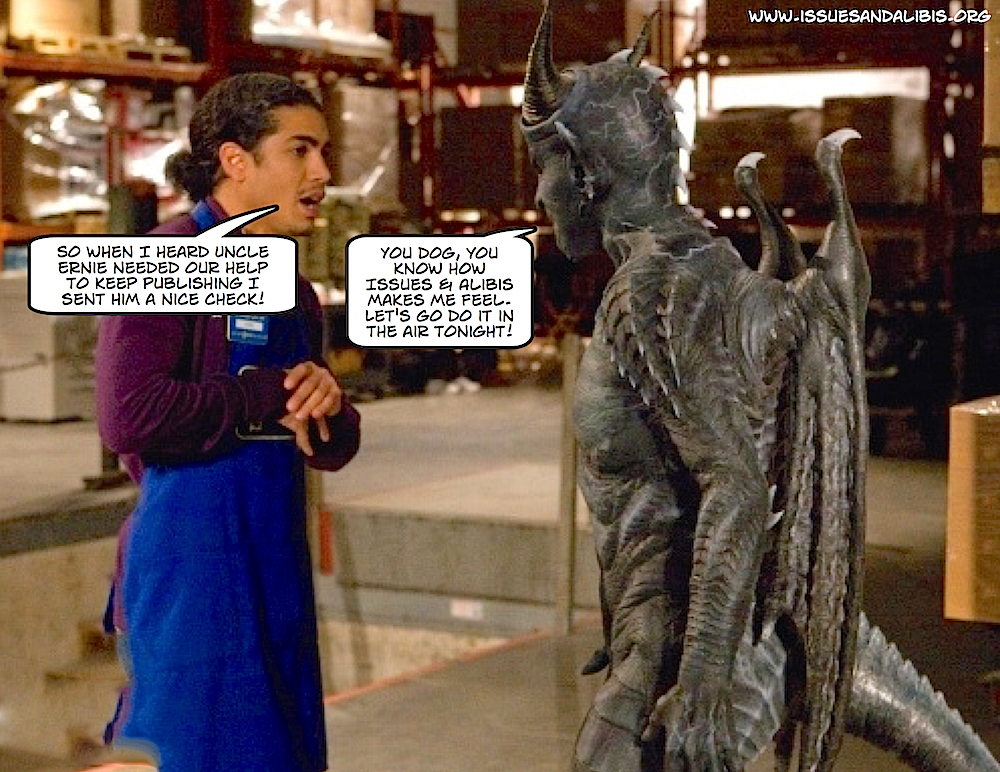 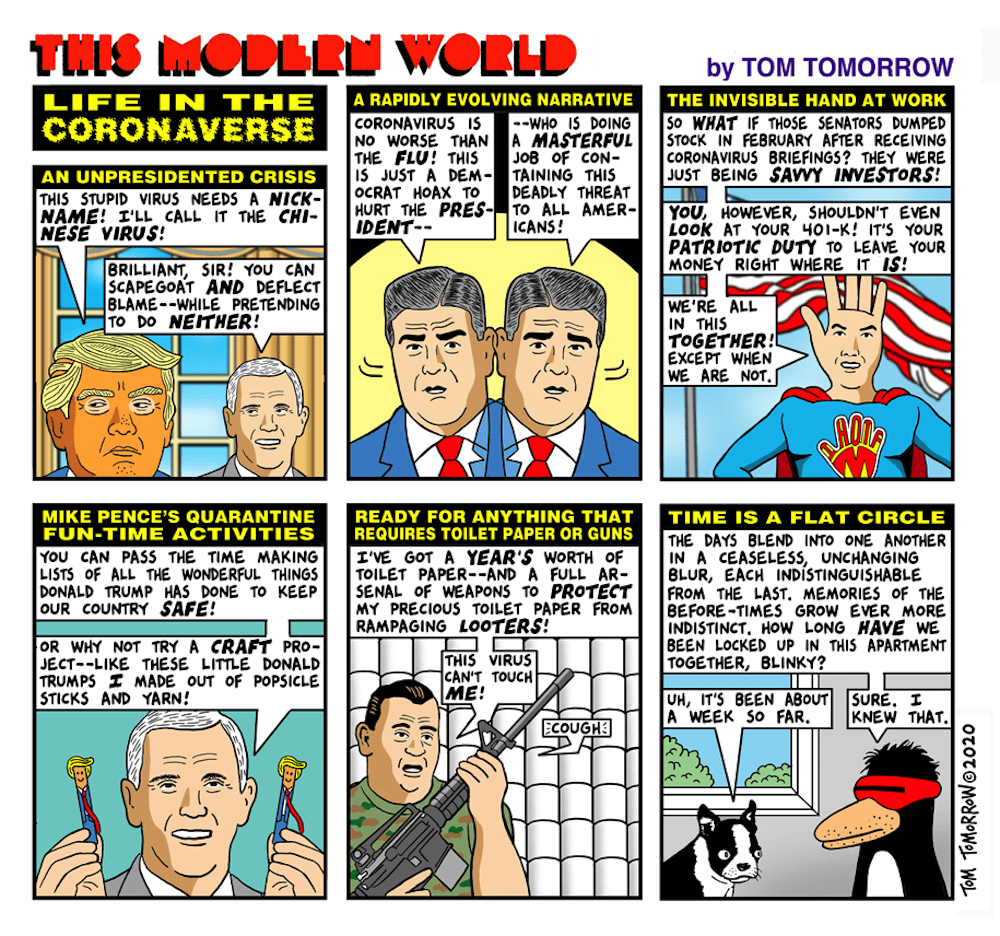 Texas Lt. Governor Dan Patrick said that he and his fellow old folks should be ready to die to save our economy. Good for Dan, one less Rethuglican in power the better off the world will be. Well, Dan, lead the way and while you're at it take Lying Donald, Pence, Turtle Boy and the rest with you. Lead by example, be like Rand Paul, Dan!

When Dan mentions the economy he means his and their economy, not the bit coins that filter down to you and me, no the economy of the billionaire class. If, I should say when, Wall Street goes belly up they'll be the ones that fall, not us. But have no fear Lying Donald will ride to their recuse, not ours. We'll be the ones losing our homes, cars and such, their jets, yachts, manisions and such will be saved, just like they were in 2008.

Besides the billionaire class only needs about 25 million of us to serve their every need, the rest are just "surplus population" getting in their way, breathing their air, drinking their water, taking up their space! The Nazis knew what to do with the old folks, they had vays of dealing with Grobvater und Grobmutter and any other undesirables. And guess what, this government has vays too!

As it's been made patently clear by Lying Donald and his junta that people don't matter only money does so if we can get back to work, ready or not, the shekels will flow! First on commerce and then with all the old folks that will die removing some of the surplus population with all their Social Security, Medicare, Medicaid, and foodstamps needs. Anyone can see that it's a double win! Right America?

I see where even small levels of global warming can increase the likelihood of extreme events, new research warns. That's prompting scientists to question how accurately disasters in the recent past can be used to predict extreme events today.

A study published Wednesday in Science Advances suggests that some research attributing climate change to individual disasters has underestimated the probability of certain extremes in the last decade. That's especially true of unprecedented hot and wet events.

That's because researchers were basing their analyses on a historical study period extending only up to the year 2005, said author Noah Diffenbaugh, a climate scientist at Stanford University. As it turns out, the warming that's occurred since then has had a big impact on global extreme events.

"The global warming, even just in the 21st century, has created such a substantial increase in the frequency of extreme hot and extreme wet events over these regions that those frequencies fall well outside of the [previously] predicted probabilities," Diffenbaugh told E&E News.

Diffenbaugh's study presents a new method for checking predictions made in previous papers that relied on data from the past. These include some of his own past work, which used CMIP5 simulations to estimate the influence of climate change on extreme heat and precipitation events in the historical period and made predictions about future extremes.

A new suite of climate models, known as CMIP6, is in development and will reflect an up-to-date historical climate period. This explains why predictions from the turn of the 21st century were so out of date about the consequences of global warming. What they thought then, wouldn't happen for 100 years is happening today!

I see where the DOJ under William Barr wants to suspend Constitutional rights during the COVID-19 emergency. I was expecting Barr to declare martial law but he went one better. The good thing is he played his hand and there is no chance the House will allow it! Still I wouldn't be surprised if Lying Donald calls for martial law.

The Department of Justice has secretly asked Congress for the ability to detain arrested people "indefinitely" in addition to other powers that one expert called "terrifying!" As bad as that is martial law is far worse. You may recall that the imposition of martial law accompanies curfews; the suspension of civil law, civil rights, and habeas corpus; and the application or extension of military law or military justice to civilians. Civilians defying martial law may be subjected to military tribunal (court-martial). Since timing is everything in life my guess would be just before the November elections? Various governors over the years have declared martial law but only one president has ever declared martial law and that was Abraham Lincoln who on April 27, 1861 on his own authority, which the court later pointed out he didn't have, suspended the right of habeas corpus. See the magazine's Happy Camps section.

Be that as it may, this week's Vidkun Quisling Award winner is attorney general William Barr! 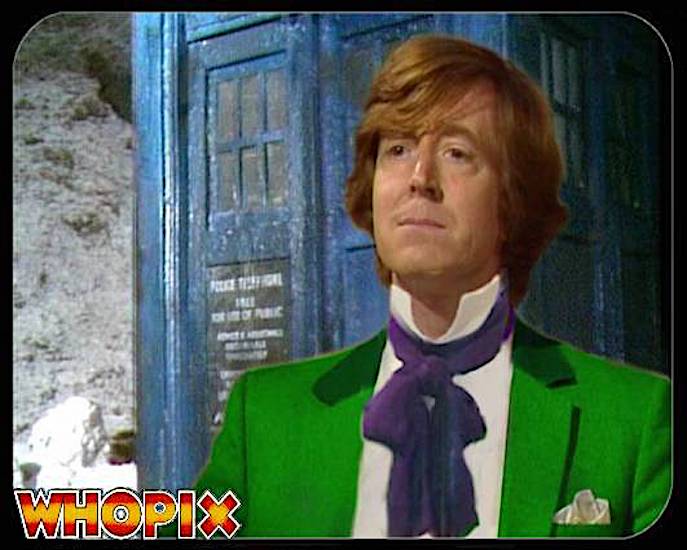 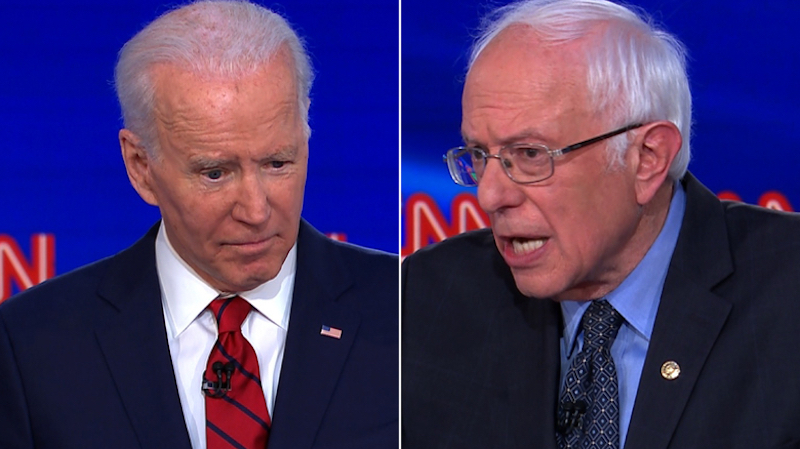 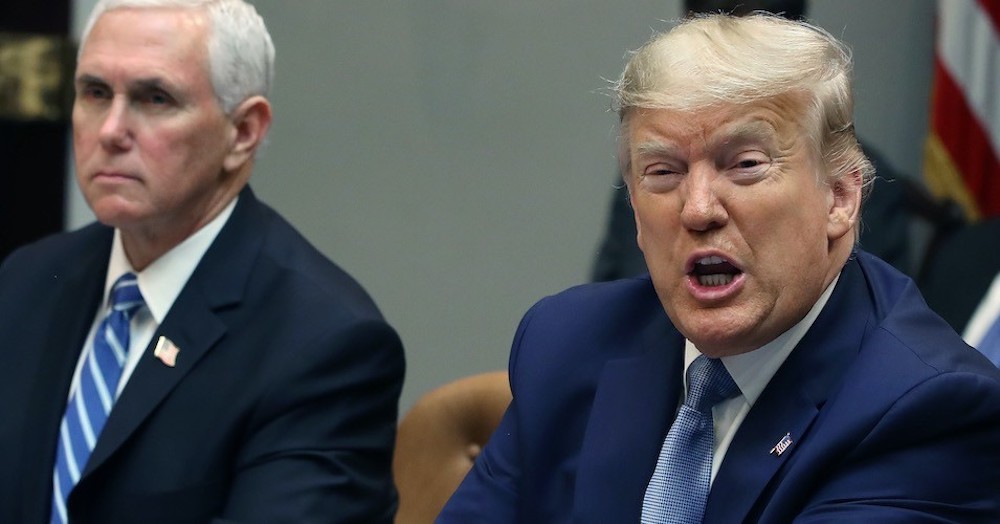 U.S. President Donald Trump speaks about the coronavirus response while flanked by Vice
President Mike Pence during a briefing with health insurers at the White House on March 10, 2020. 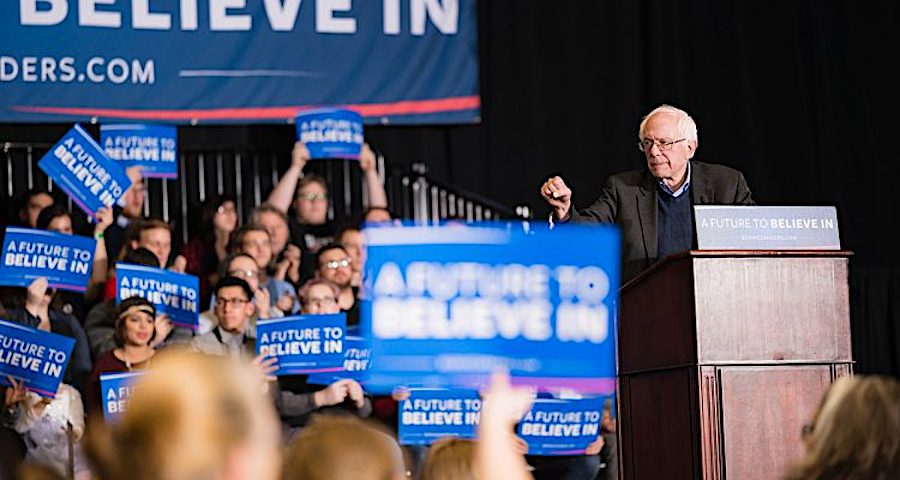 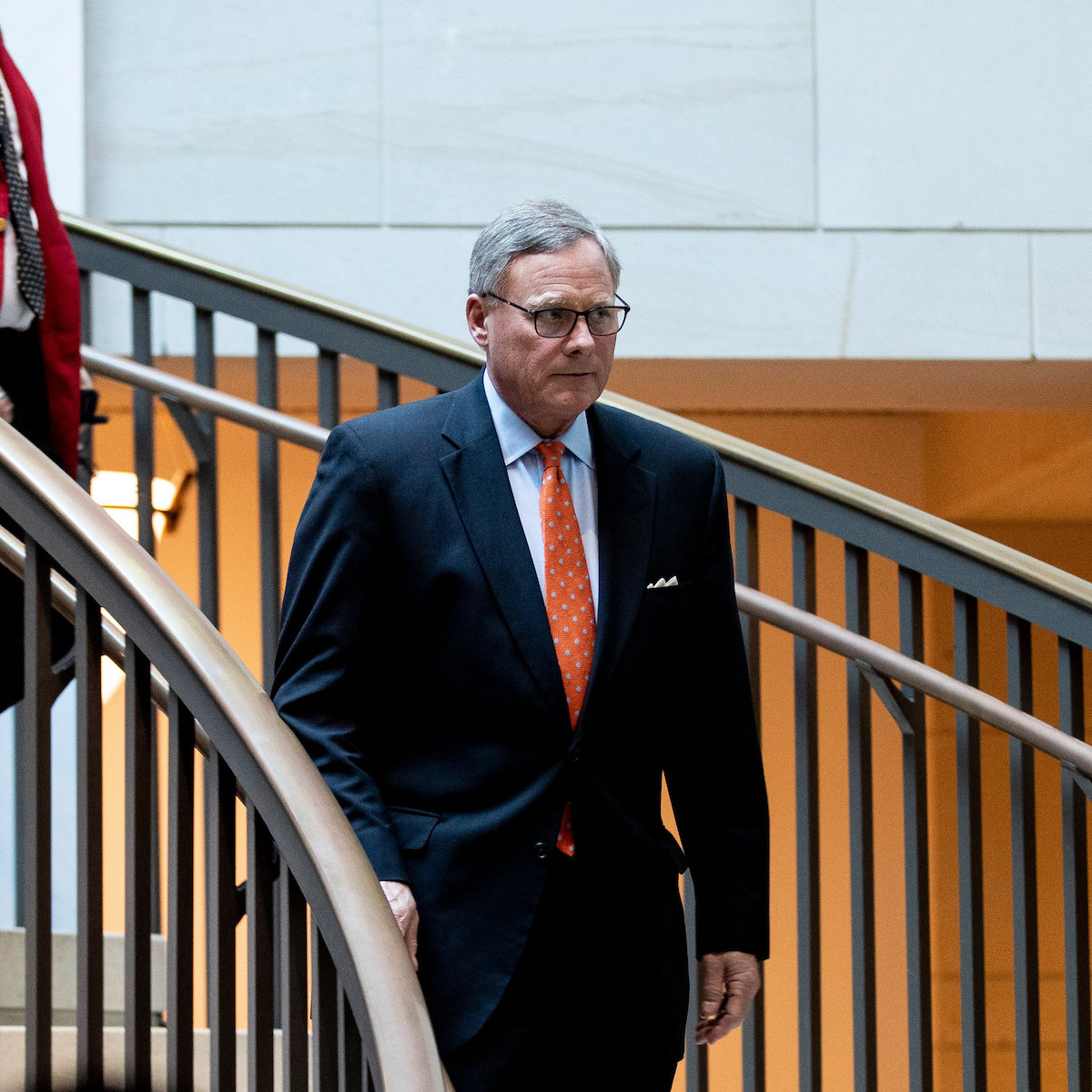 Sen. Richard Burr is among four Republican senators now reported to have dumped millions of
dollars in stock holdings after receiving briefings on COVID-19 weeks ago, before the market crash. 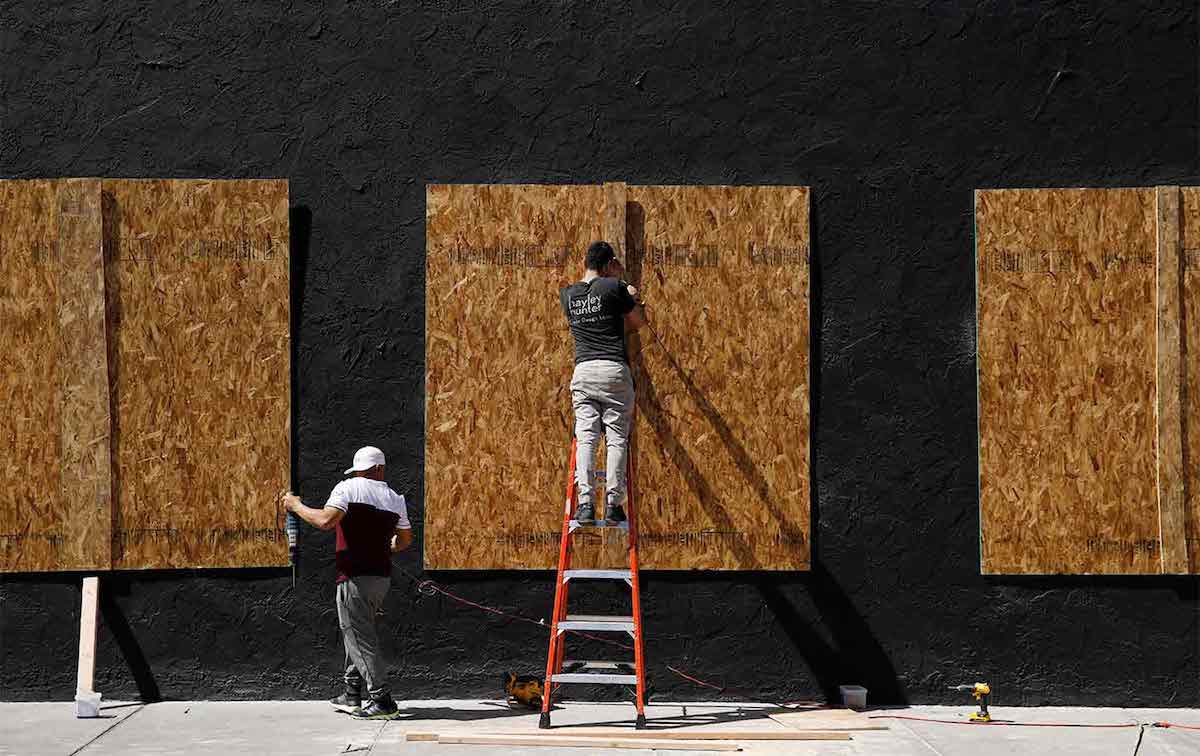 Workers board up a bar in Nevada. All nonessential businesses have been ordered to close in response to coronavirus. 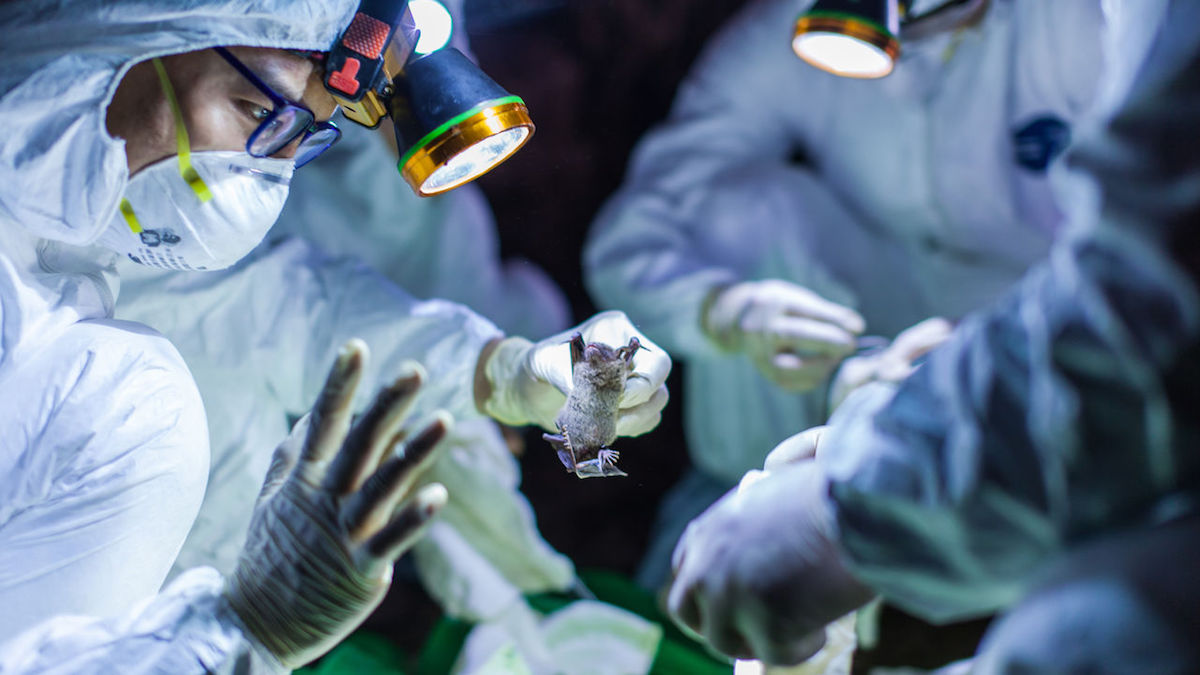 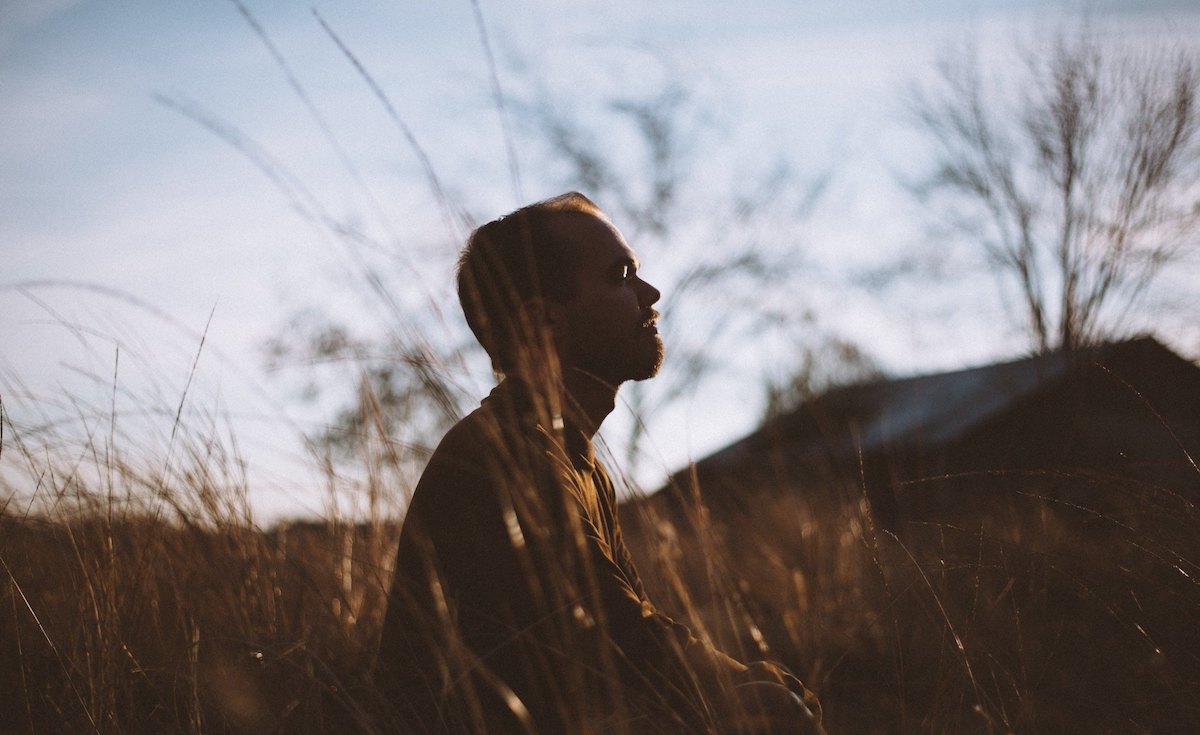 Where could idleness be introduced? 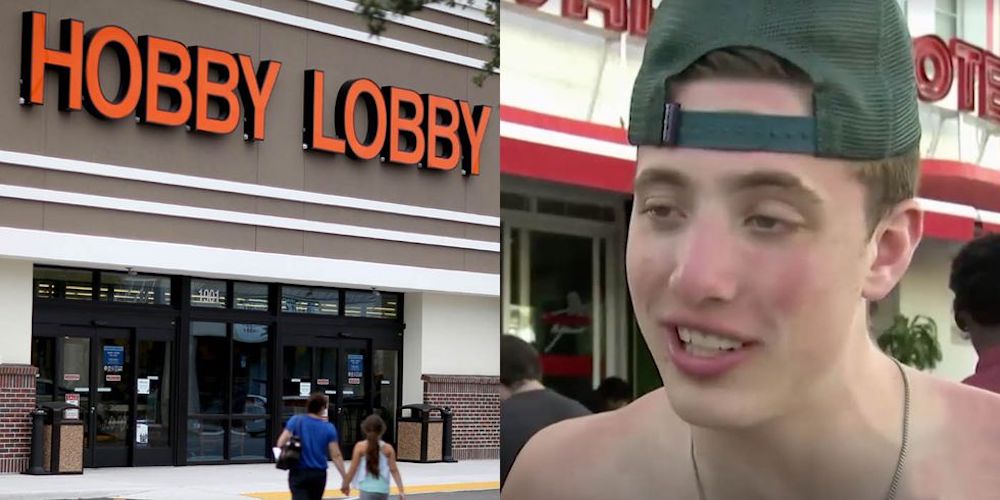 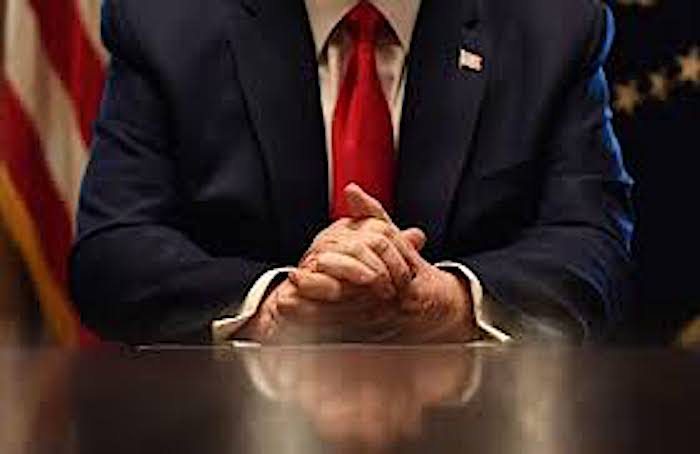 President Trump's hands are seen as he speaks to the press after a meeting with nursing industry
representatives on the response to COVID-19, at the White House in Washington, D.C., March 18, 2020. 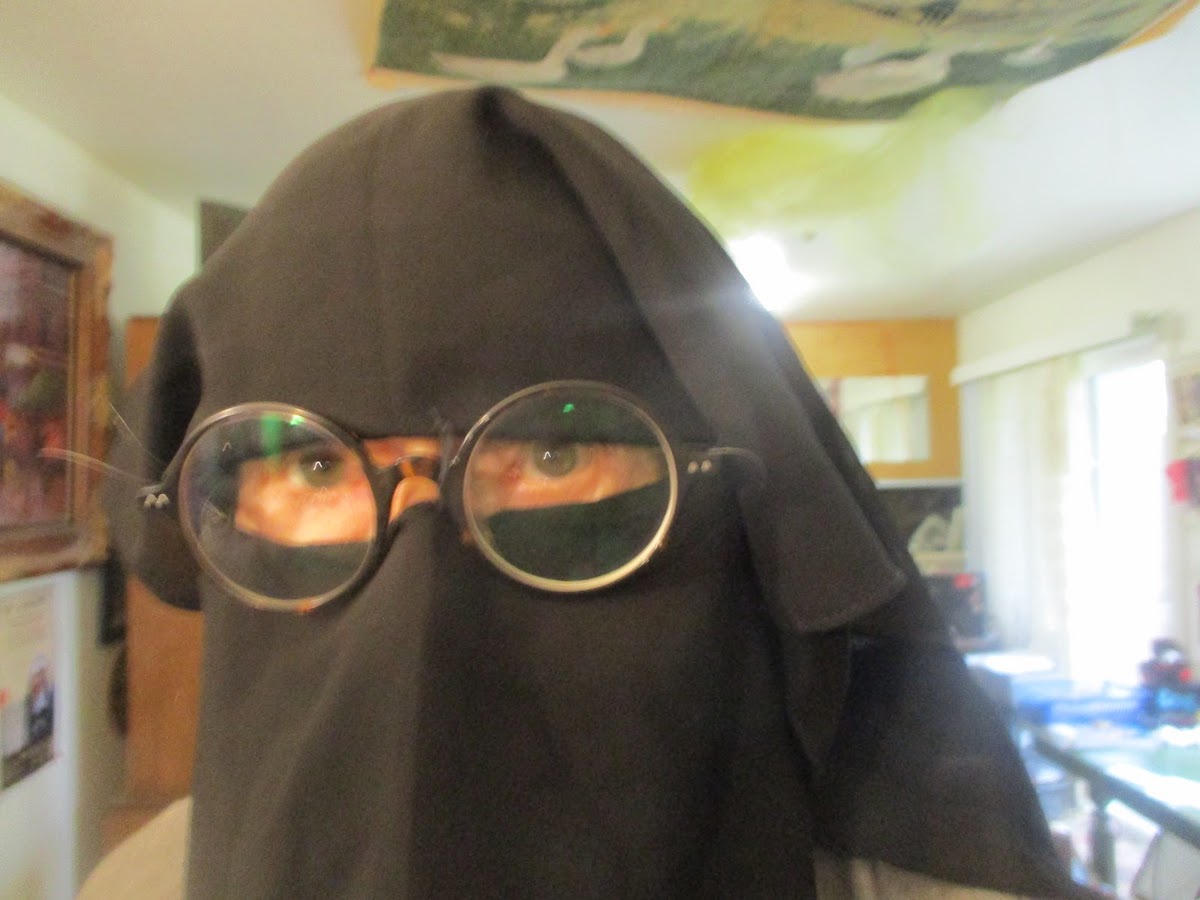 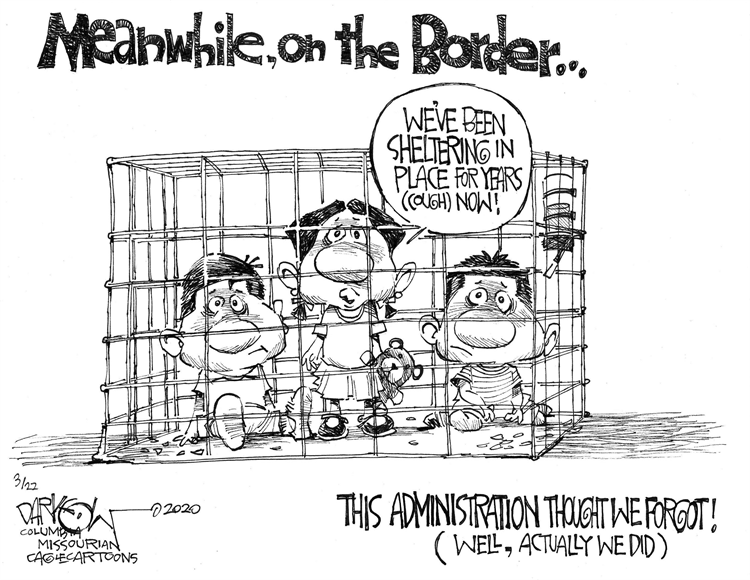 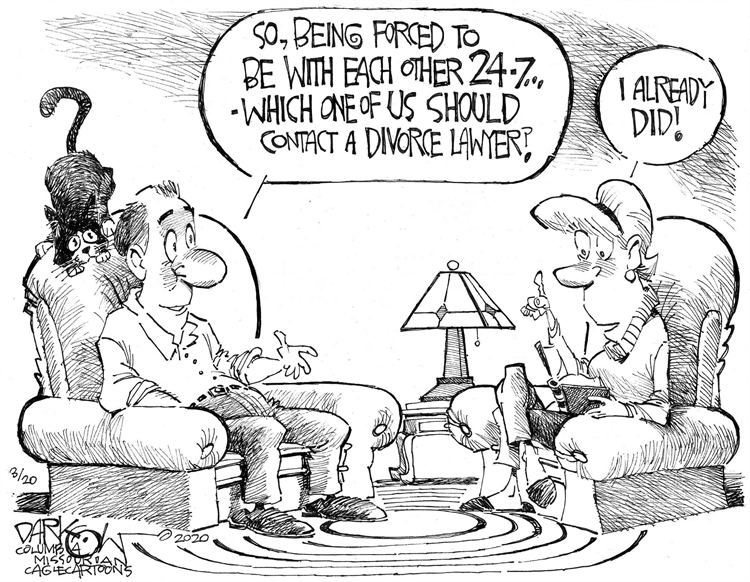 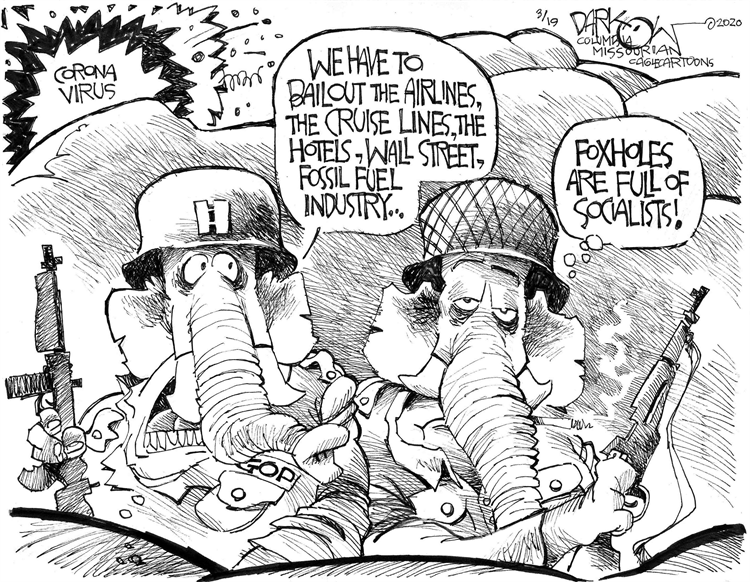 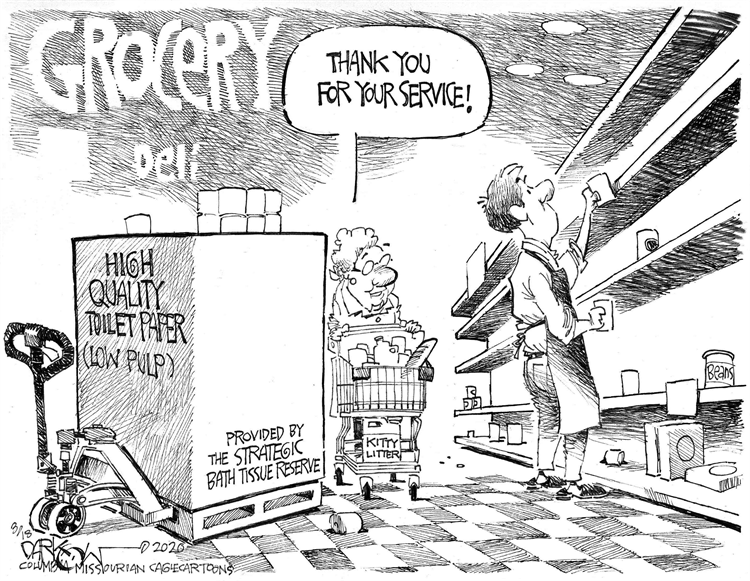 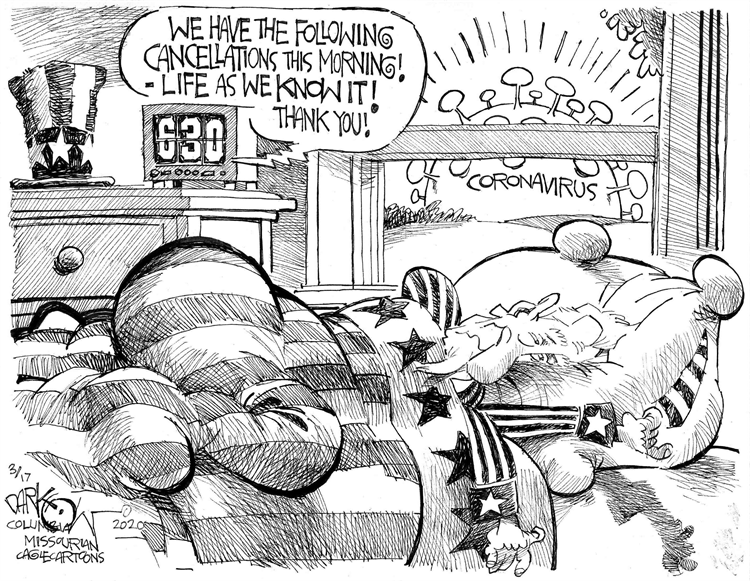