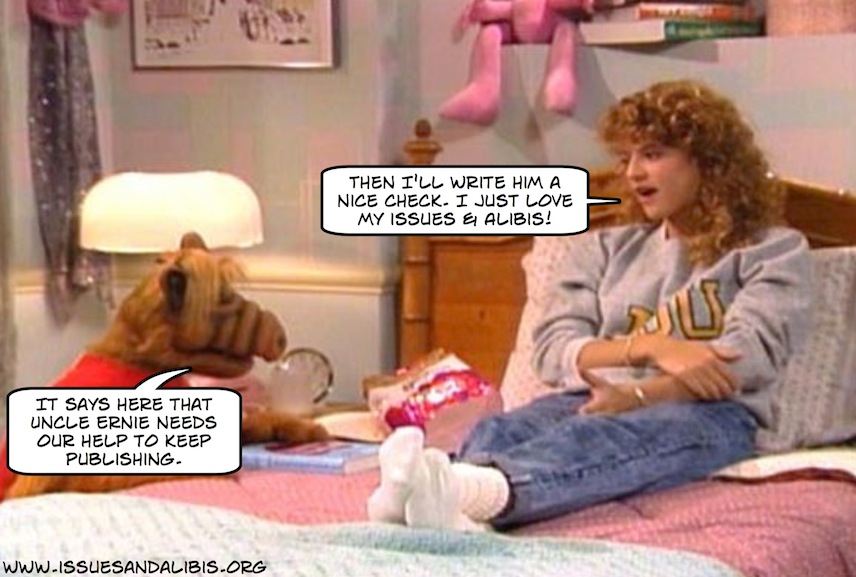 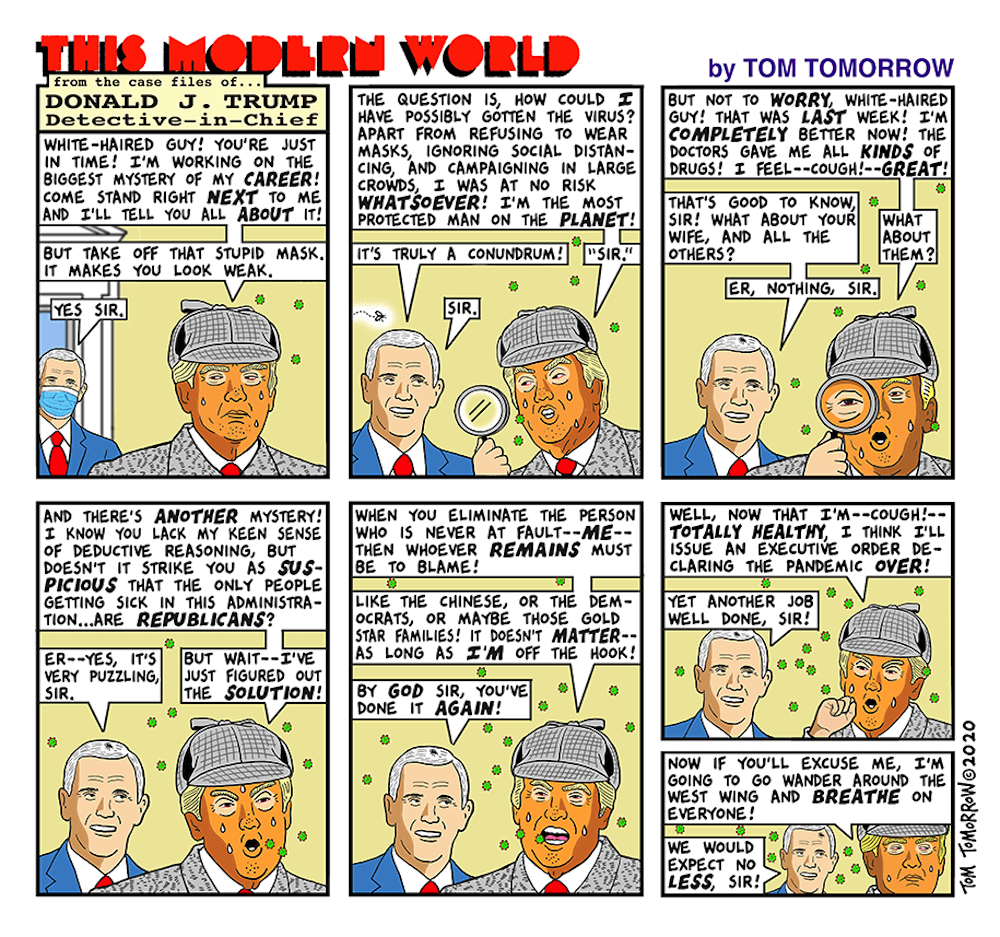 Let me show you how my mind works! The other day I was recalling some things that happened when I was living in Hollywood. For example, one day I was cruising up Benedict Canyon Drive towards Mullholland and off to my right was a guy hitchhiking and I started to slow down to give him a ride but this guy was the spitting image of Charlie Manson and even though I knew Charlie was in prison I sped up and passed him by.

Then I recalled that Charlie had never killed anyone, what got him life in prison was that he convinced his "family" to go and kill others. Are you having a deja vu yet? The big story in Michigan is the plot to go and kidnap our Governor Gretchen Whitmer then put her on trial, and then kill her for daring to try and save Michigan lives from Covid-19. How dare she indeed!

These thirteen fascist losers who were part of the plot That had been egged on by Lying Donald saying to "Liberate Michigan" and "Stand back and stand by," and "they're some very fine people," and the like. So every right-wing whacko in America sees Lying Donald as giving them the green light for their various acts of treason. My point, of course, is that Lying Donald, like Charlie Manson is guilty of egging others on to do mayhem and murder. The reason that Lying Donald refuses to condemn White supremacists is that he considers himself to be one of them! So, after next January, shouldn't Lying Donald be put on trial for doing the very same thing that Charlie Manson did?

I see where coastal cities and cultural sites around the world could soon be submerged in water if the melting of ice in Antarctica reaches an "irreversible" level. If global warming is allowed to continue unchecked, most of Antarctica will be gone forever, a new study warns.

"The melting of ice in Antarctica can make glaciers the size of Florida slide into the ocean," said Anders Levermann, a researcher at the Potsdam Institute for Climate Impact Research in Germany, and a co-author of the study. The team ran computer simulations to identify "where exactly and at which warming levels the ice in Antarctica would melt."

"We find that already at 2 degrees of warming, melting and the accelerated ice flow into the ocean will, eventually, entail 2.5 meters (8 feet) of a global sea-level rise just from Antarctica alone. At 4 degrees, it will be 6.5 meters (21 feet) and at 6 degrees almost 12 meters (39 feet) if these temperature levels would be sustained long enough,"

Levermann said in a press release. Of course this is nothing new, I've been telling you this for over a decade!

"The cultural sites in danger of being submerged include the Copacabana Beach in Brazil's Rio de Janeiro and Sydney's Opera House. Cities including London, New York City, Tokyo, Mumbai in India, and Hamburg, Germany, are also at risk," the researchers say. And let's not forget about most of Florida and coastal cites all around America sliding under the waves.

Antarctica holds more than 50% of fresh water on Earth," Ricarda Winkelmann, a researcher at the Potsdam Institute for Climate Impact Research, said in the press release. Human activities, most particularly greenhouse-gas emissions, heat the ocean water and atmosphere. This leads to the melting of snow on the South Pole, which eventually cracks and glides into a warming ocean.

The only solution the researchers see at present is to bring the world's temperature back to pre-industrial levels. "Fat chance of Fong" of that happening!

"Indeed, temperatures would have to go back to pre-industrial levels to allow its full recovery - a highly unlikely scenario. In other words: What we lose of Antarctica now, is lost forever," Leverman said.

So I'll ask again, "How long can you tread water coastal, America?"

Judge Amy Coney Barrett, Lying Donald's Extreme Court nomine is a little to the right of Lying Donald, as Lying Donald is a little to the right of, Darth Vader. She loves business and Lying Donald and Jesus in the order. When Moscow Mitch puts her on the Extreme Court next week that will be the end to a lot of things for the next 30 years or so. Goodbye women's rights, and ladies if Amy has her way get ready to become a hand maids as Amy was. You can kiss the environment goodbye and a take full embrace of Global Warming! Say hello to bible based laws, Lying Donald in office for life, more tax cuts for the rich and everything that corporate America wants!

How do we know such things? For two reasons. One her record on the court since Lying Donald put her on the Seventh Circuit Court of Appeals, and her intent is clear as a bell! Her love and embrace of everything that "Atonin (Fat Tony) Scalia" stood for and embraced. And from words right out of her mouth in her Senate hearing. We are soooooooo screwed, America.

Therefore, the board of regents at Issues & Alibis magazine have voted, and Amy Coney Barrett is this week's winner of the Vidkun Quisling Award! 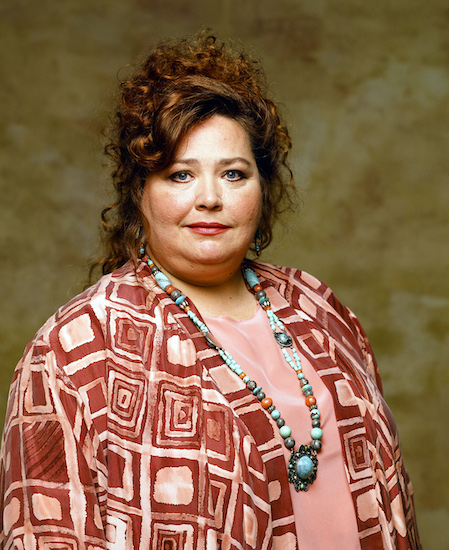 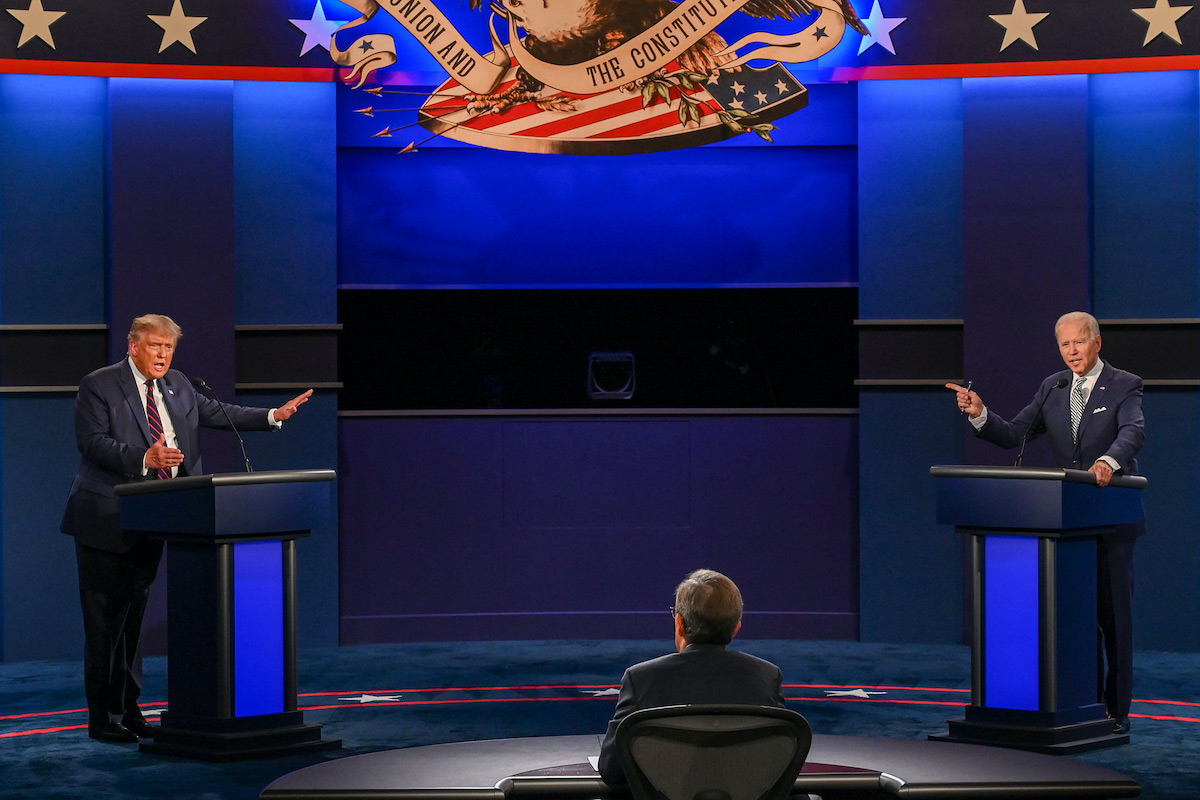 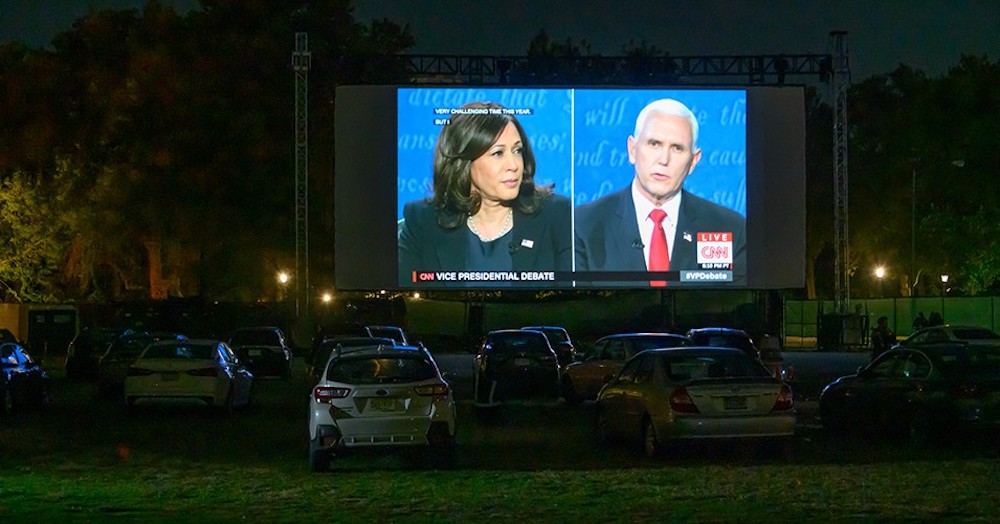 People attend a drive-in watch party for the 2020 United States Vice Presidential debate
in Queens Drive-In at The New York Hall of Science on October 07, 2020 in New York City. 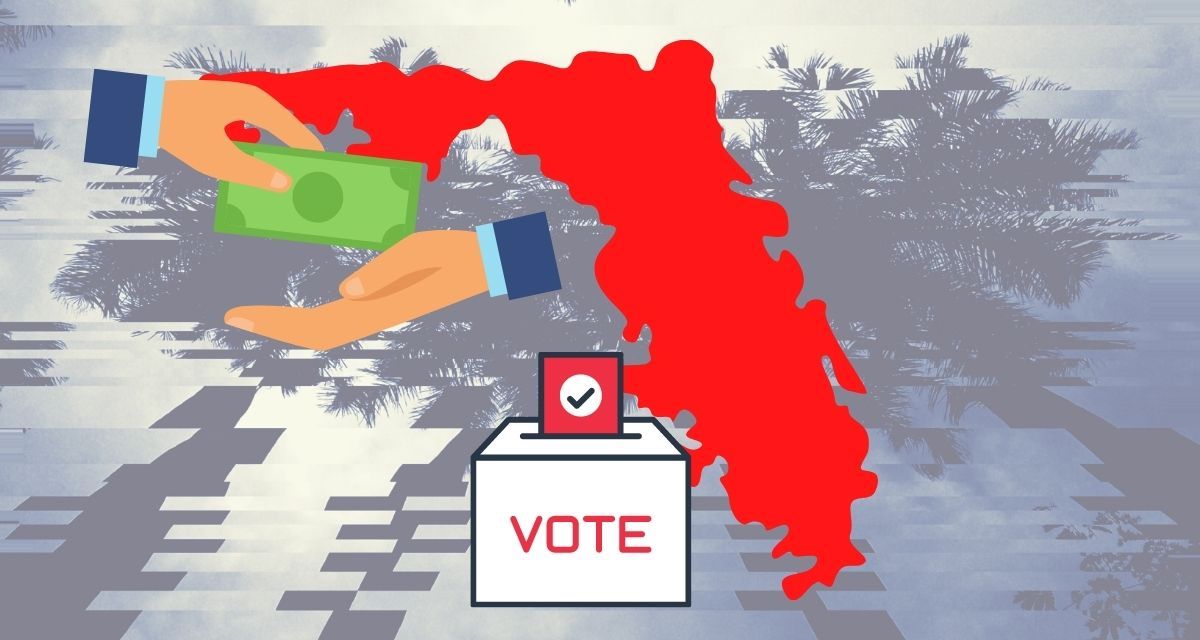 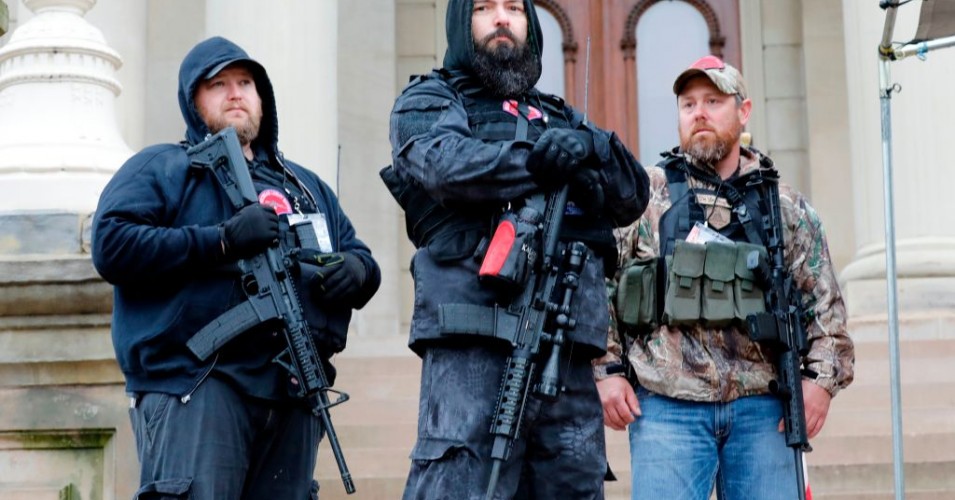 Armed protesters provide security as demonstrators take part in an "American Patriot Rally," organized
on April 30, 2020, by Michigan United for Liberty on the steps of the Michigan State Capitol in Lansing. 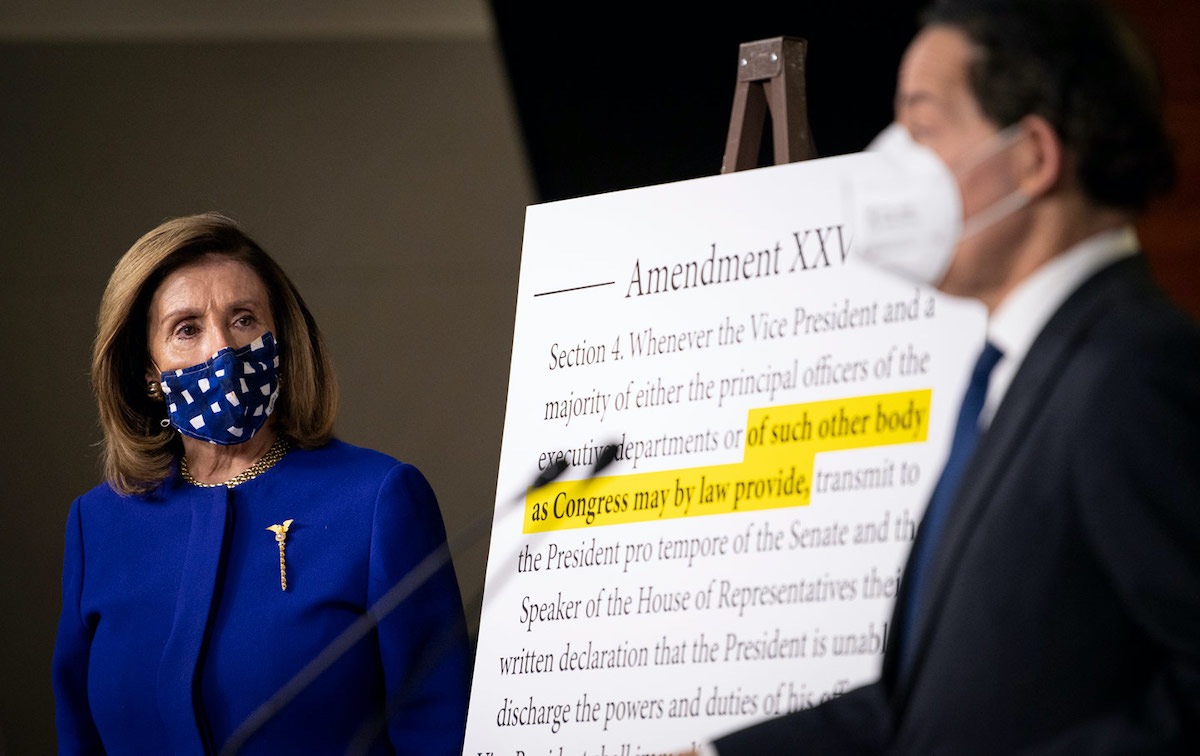 Speaker of the House Nancy Pelosi listens to Representative Jamie Raskin discuss legislation to create a commission to allow Congress to intervene under the 25th Amendment. 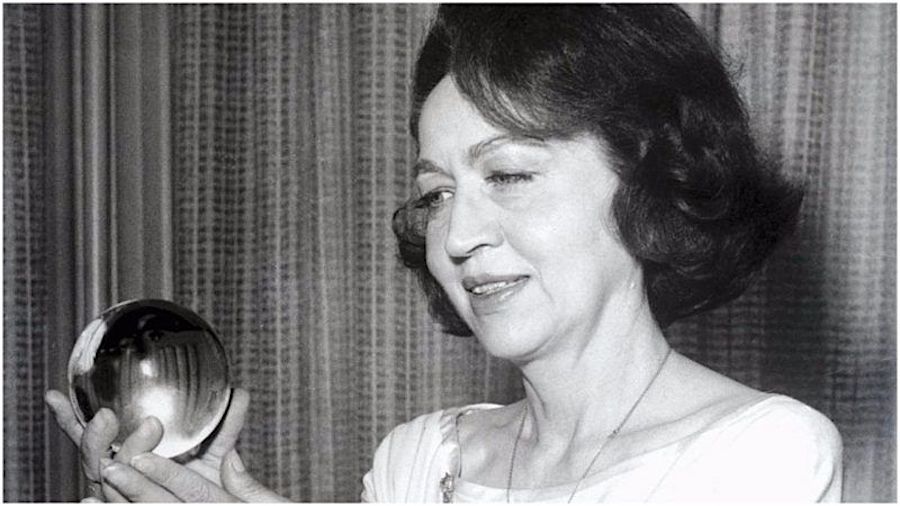 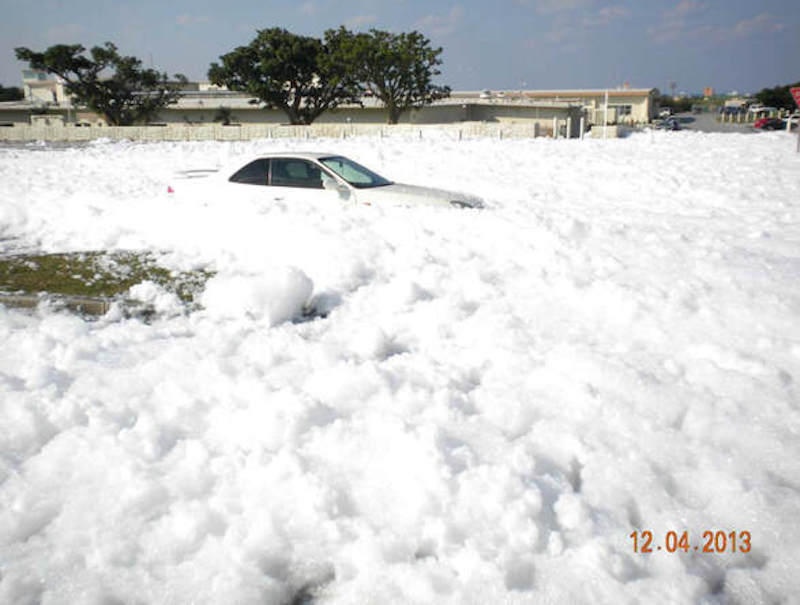 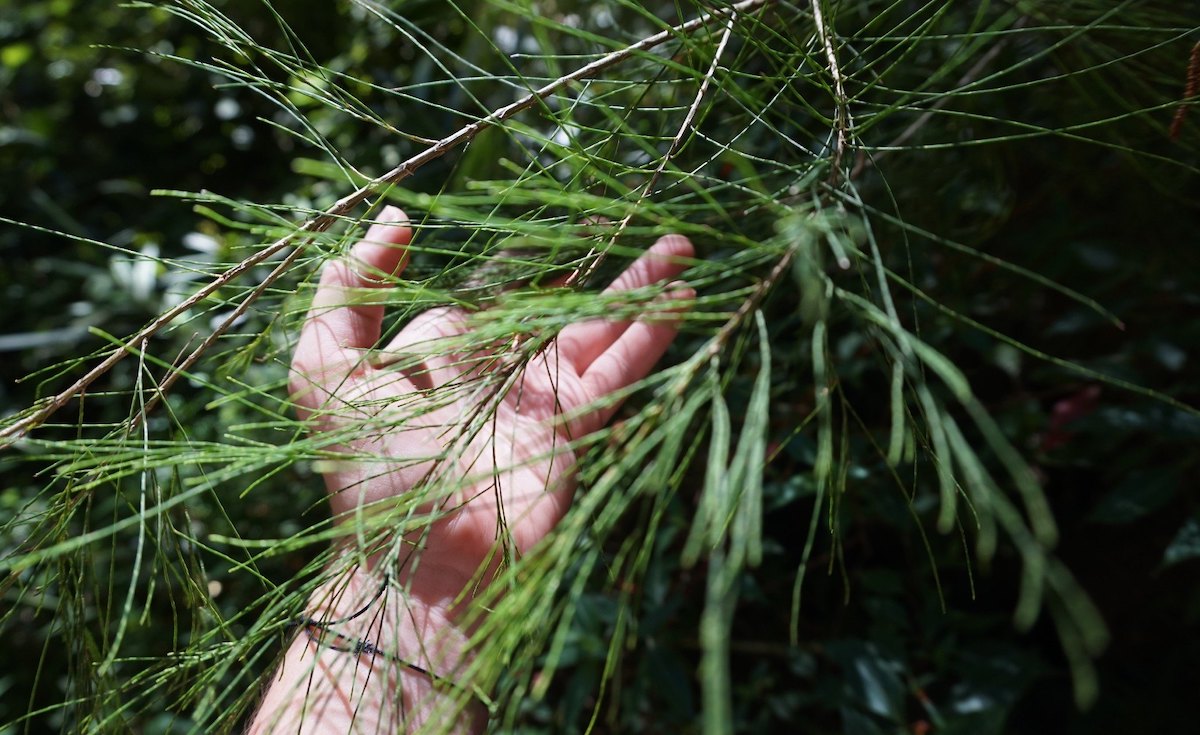 In the face of uncertainty, nature brings solace and sustenance 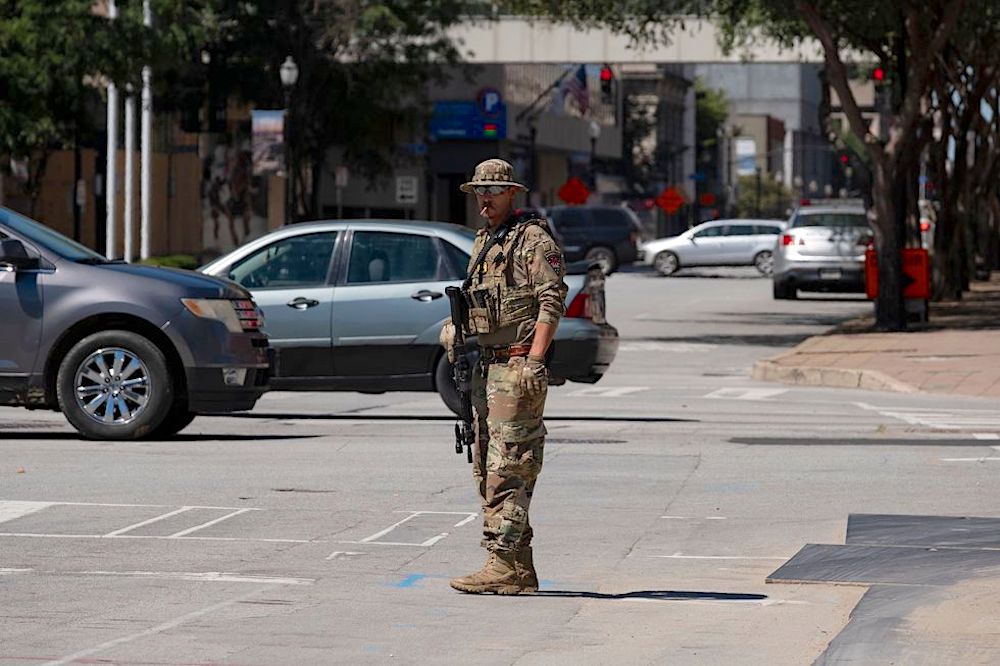 A member of a right wing patriot militia blocks traffic as other members march in downtown Louisville, Kentucky, on september 5, 2020 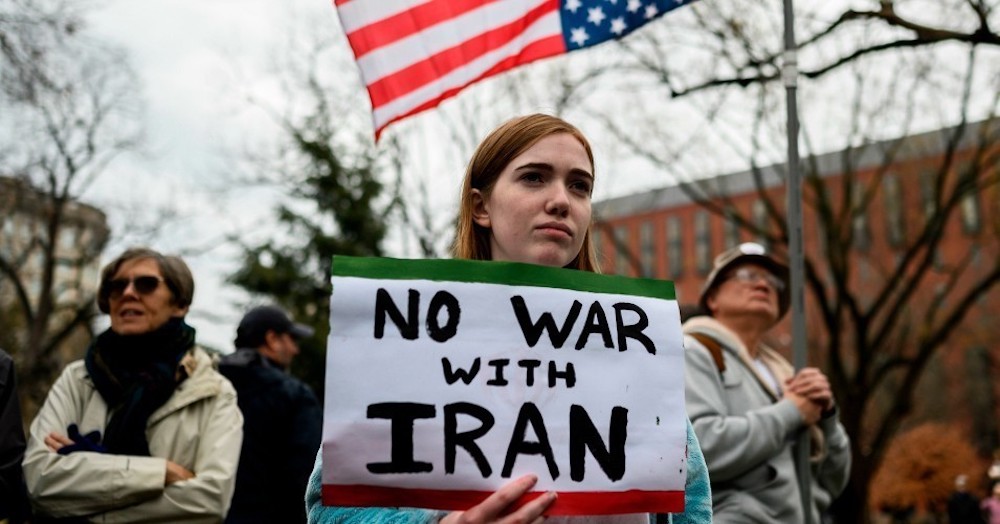 So Iran gave up most of its latent nuclear deterrence and not only got nothing in return,
it got the most crippling sanctions ever applied to one country by another in peacetime. 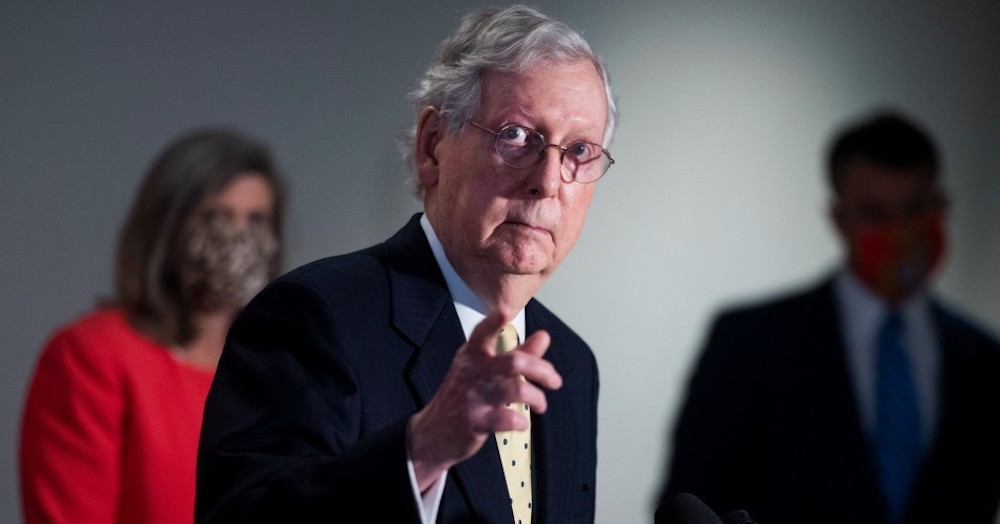 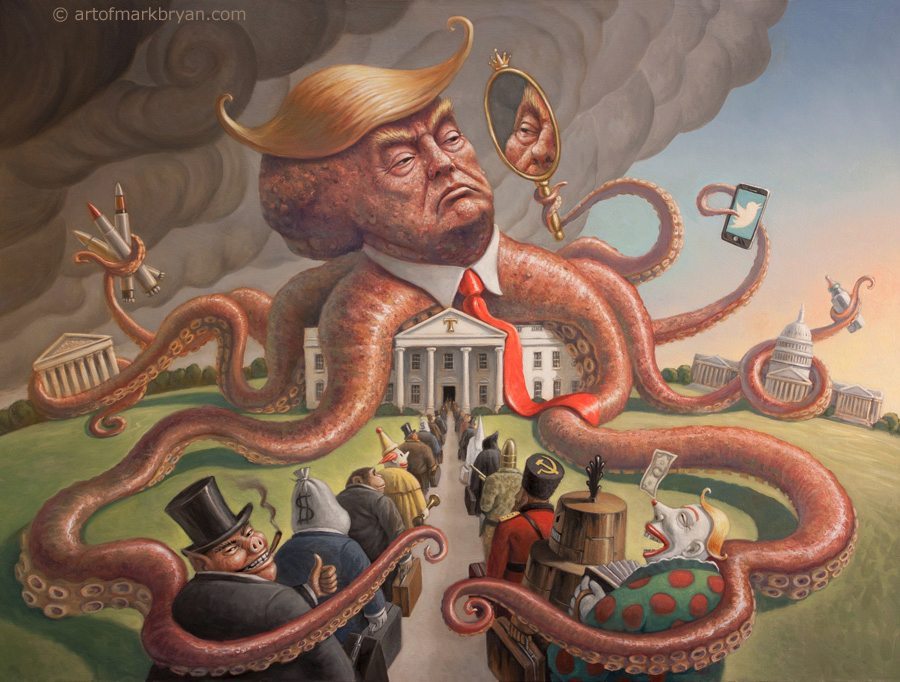 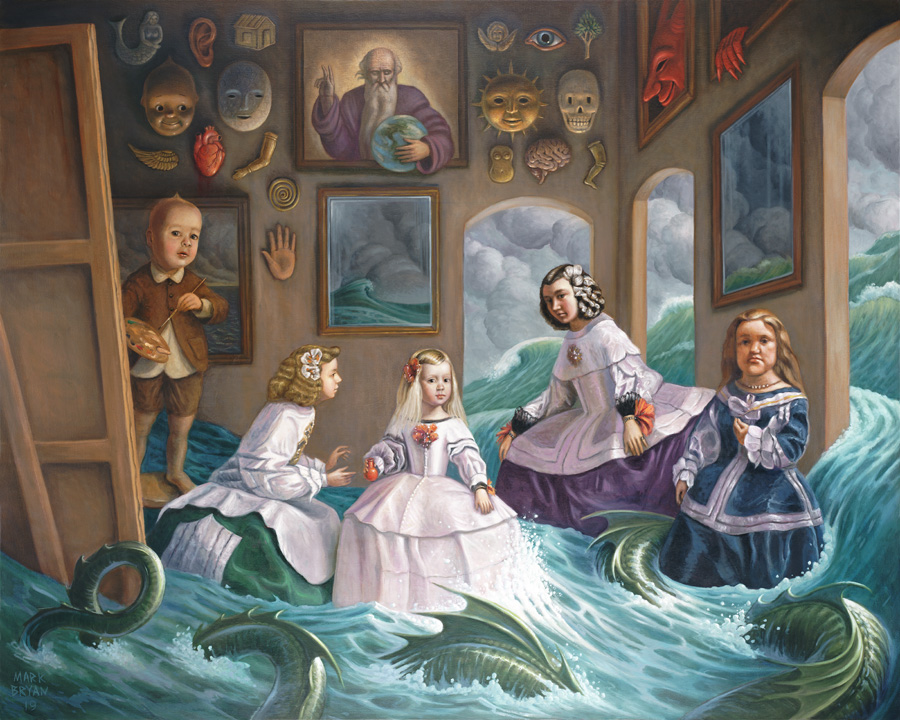 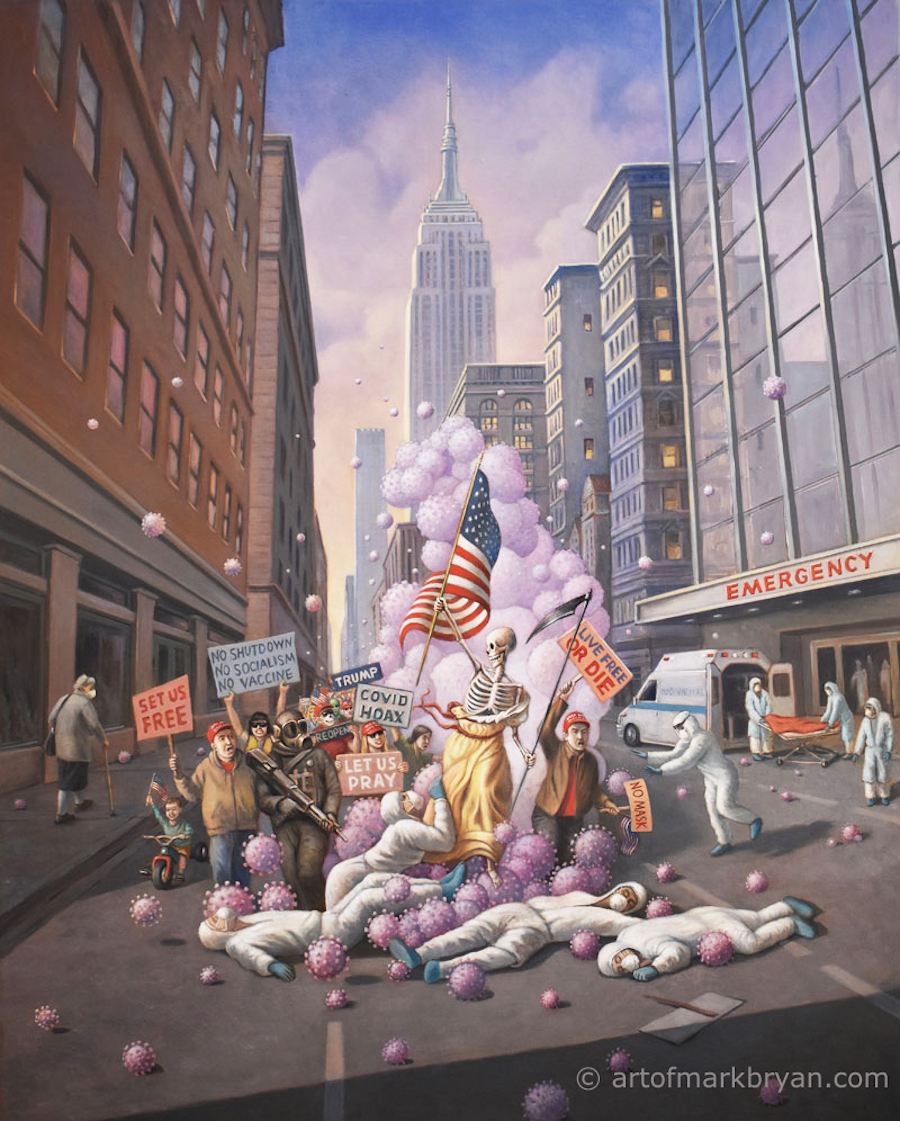 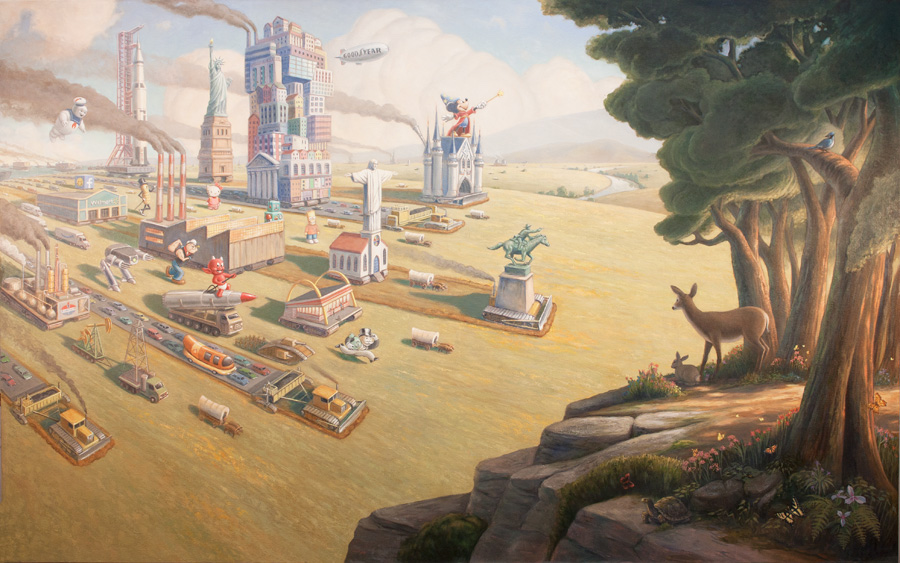 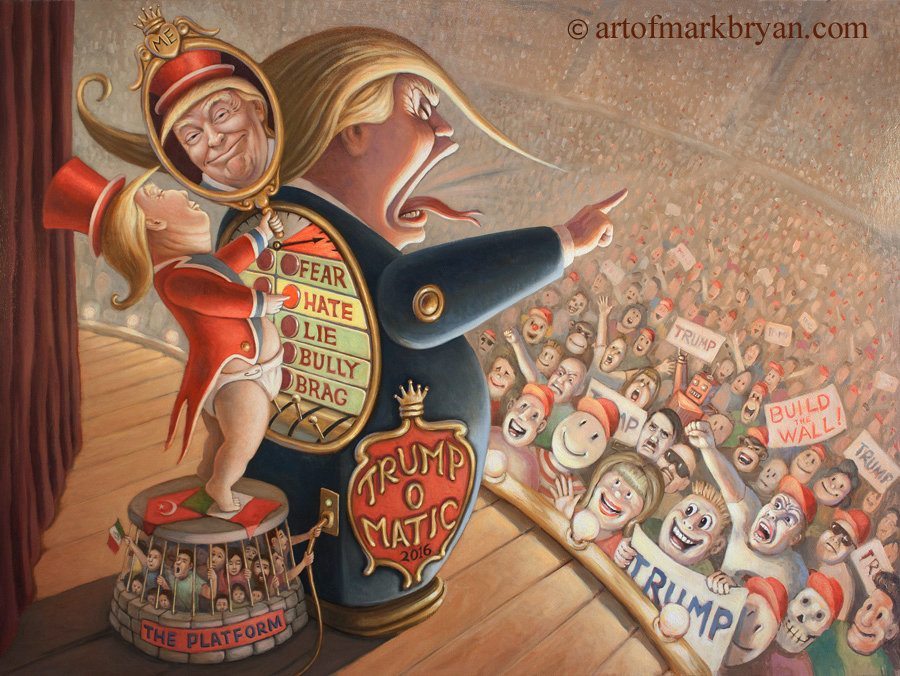 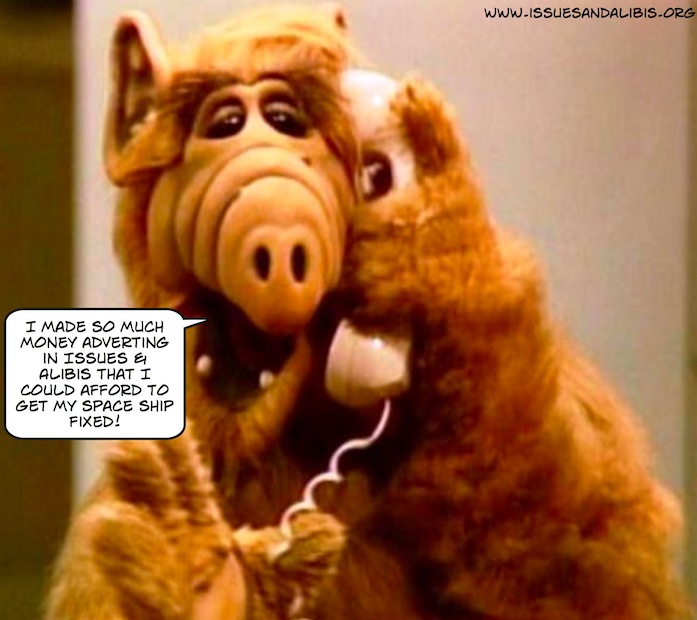