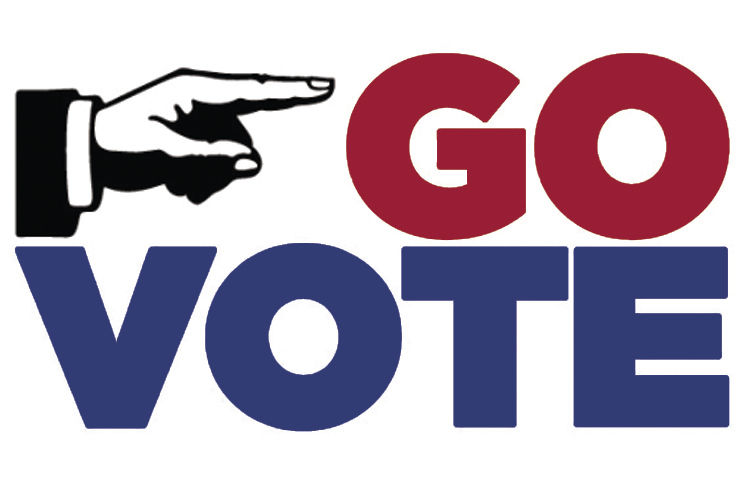 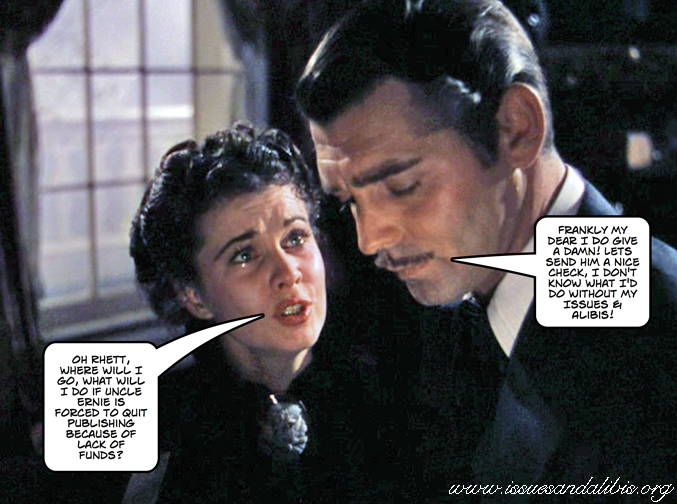 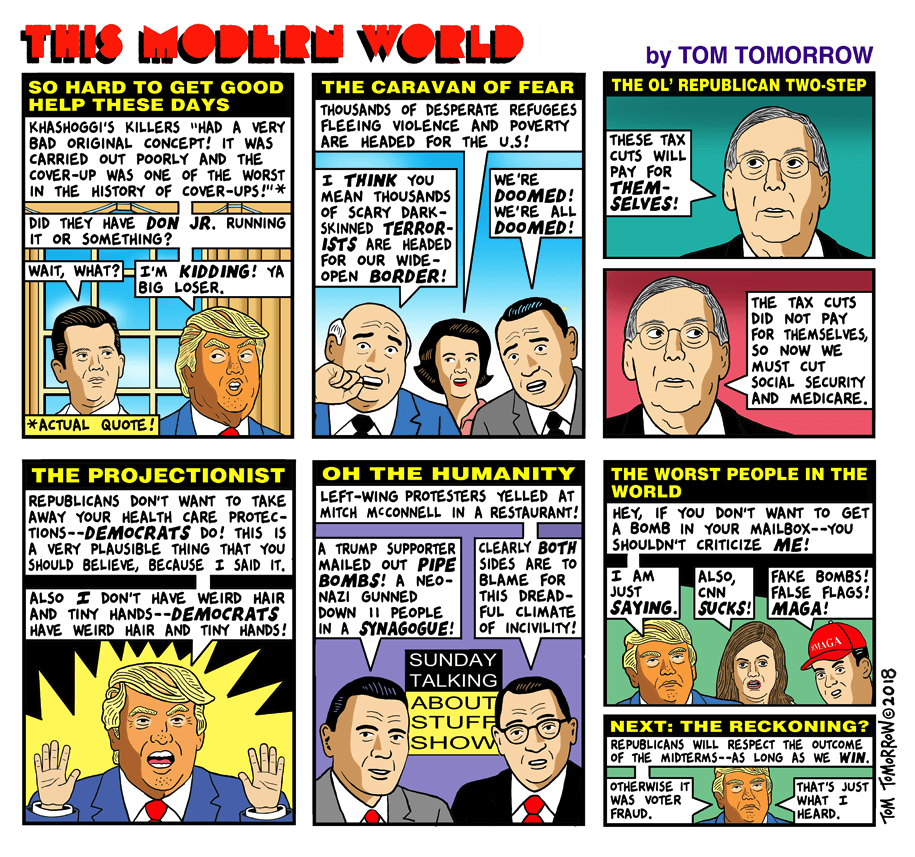 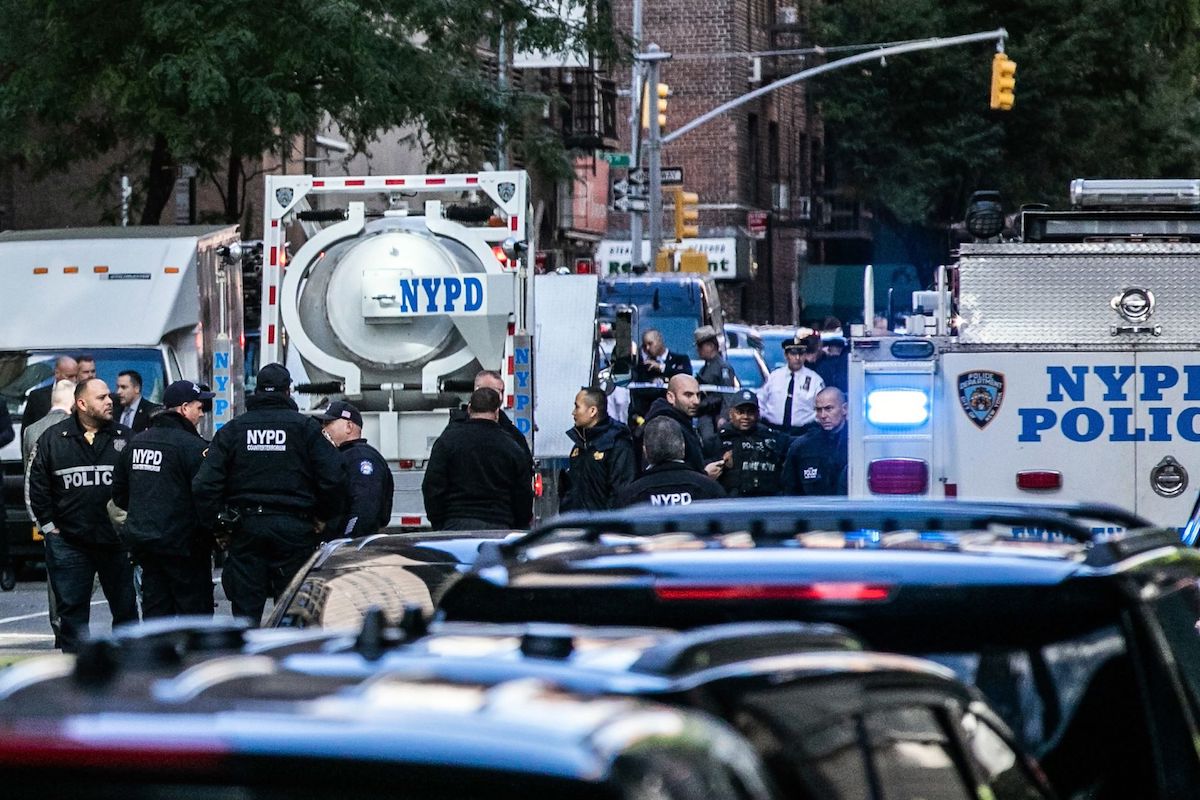 Police investigators gather around a bomb squad truck outside the Time Warner Center in New York
after the discovery of an explosive device at the CNN offices on Wednesday, Oct. 24, 2018 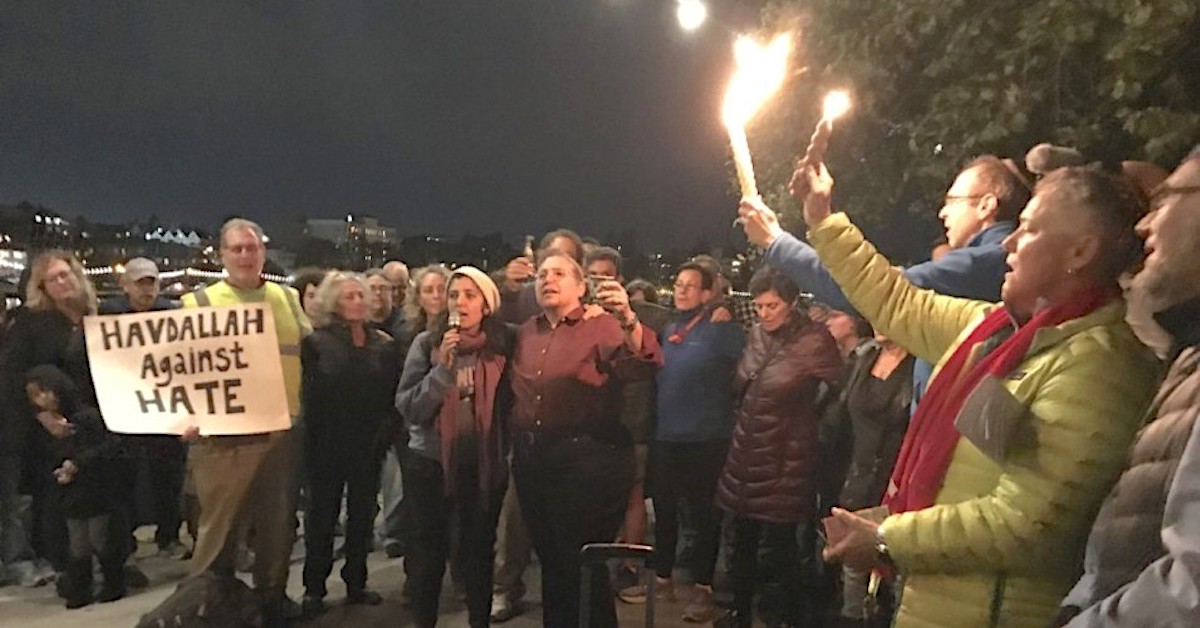 A vigil at Lake Merritt in Oakland, California to remember the victims of a deadly shooting at a synagogue in Pittsburgh, Pennsylvania, Oct. 27, 2018 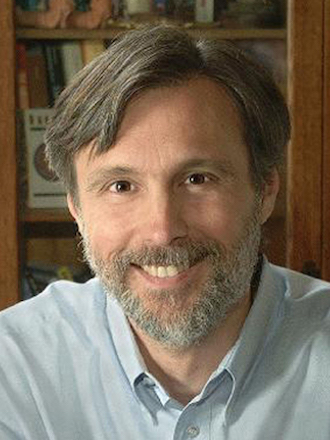 It's A Right-Wing Cover-Up: Trump Was A Big Inspiration For The Synagogue Slaughter In Pittsburgh
We can't let them conceal the motive for the killings, which lead back to Trump
By Thom Hartmann

It's already started. They're messaging, texting, tweeting, and even calling into my radio/TV show. Breitbart is even bragging that they got it on CNN.

"This killing in Pittsburgh has nothing to do with Donald Trump. He's not an anti-Semite; his daughter converted to Judaism and his grandkids are Jews! How can you blame him for the 'mentally ill' guy [a phrase used to describe terrorists only when they're white]?"

But the shooter, by his own words-words that are almost entirely missing from most TV coverage-acted because of what both Trump and Newt Gingrich have said was the main election-year message of Trump and the entire Republican Party: Immigration by people of color.

As the terrorist himself posted on social media just a few hours before he walked into the Tree of Life Synagogue in Pittsburgh with an AR-15, he was going to kill members of a congregation that supported the Hebrew Immigrant Aid Society (HIAS).

HIAS (whose slogan is "Welcome the stranger; Protect the refugee") had designated October 19 and 20 of this year as the "National Refugee Shabbat" and when they did so, the terrorist posted on a right-wing social media site, "Why hello there HIAS! You like to bring in hostile invaders to dwell among us? We appreciate the list of friends you have provided."

HIAS was founded in New York in 1881 to help resettle Jewish refugees, but in recent years has moved many of its efforts toward other refugees, including people from Africa, the Americas, and people who practice Islam. As HIAS's president, Mark Hetfield, told the New York Times, "We used to welcome refugees because they were Jewish. Today HIAS welcomes refugees because we are Jewish."

Dark skin and "Muslim" are triggers for bigots like the cowardly terrorist and his buddies on social media. In another post, presumably referencing HIAS, he wrote, "Open you [sic] Eyes! It's the filthy evil jews [sic] Bringing the Filthy evil Muslims into the Country!!"

HIAS used to have a link on its website to the 270 congregations in 32 states that were participating in the work to bring refugees into the United States (and elsewhere), although that link now just points back to their homepage (perhaps because the event is over, or maybe because of the terrorist's threat).

Noting the terrorist's pointing out that link to the congregations, which included Tree of Life in Pittsburgh, the Times of Israel reported, "To mark the organization's personal involvement, at the back of the hall, information on volunteer opportunities in the refugee and immigration committees of participating synagogues and HIAS materials were available for attendees to take home, including a bookmark with the words 'My People Were Refugees Too.'"

Apparently this festered with the terrorist, because just a few hours before he walked past those brochures and started murdering people at Tree of Life, he posted to a right-wing social media site, "HIAS likes to bring invaders in that kill our people. I can't sit by and watch my people get slaughtered. Screw your optics, I'm going in."

And in he went, guns blazing.

So, Trump and Gingrich and Fox are giving all-day, all-the-time coverage to a ragtag band of Central American refugees, mostly women and children, who are traveling together on foot for their own mutual safety, lying that there are Arab terrorists and evil gang members among them. This white American terrorist gets increasingly agitated by it all, freaked out that more people of color (or even Muslims!) might be coming to our border to legally apply to asylum, and decides it's time to take out one of the groups associated with HIAS, who is helping refugees.

It's a straight line-through Fox and right-wing hate radio-from Trump's rhetoric about immigrants to the terrorist himself.

Certainly this terrorist had a history of hating Jews; he had repeatedly posted on one of his snowflake "safe places" for haters, "Kill all the Jews!" and "There is no MAGA as long as there is a kike infestation."

But this wasn't entirely an anti-Semitic attack, by the attacker's own words.

A few days after another white terrorist "history of mental illness," said the media) with Trump and Fox graphics and slogans all over his van attempted the largest political assassination in U.S. history, we now have the single most lethal attack on Jews in this country's history-in part because their synagogue supported helping immigrants coming into America.

And all of it being amped up, day after day, over and over again, by Trump.

This aspect of xenophobic immigrant-hating, along with the insanity of the U.S. allowing AR-15s and other weapons of war on our streets, must be discussed along with the horrors of anti-Semitism.

This is all one package brought to us by Trump, and it's beginning to eerily resemble a previous insecure man with little hands, single testicle, and a big mouth in the 1930s who warned his people about both immigrants and Jews.

We all know how well that turned out for Germany and the world.
(c) 2018 Thom Hartmann is a Project Censored Award-winning New York Times best-selling author, and host of a nationally syndicated daily progressive talk program The Thom Hartmann Show. 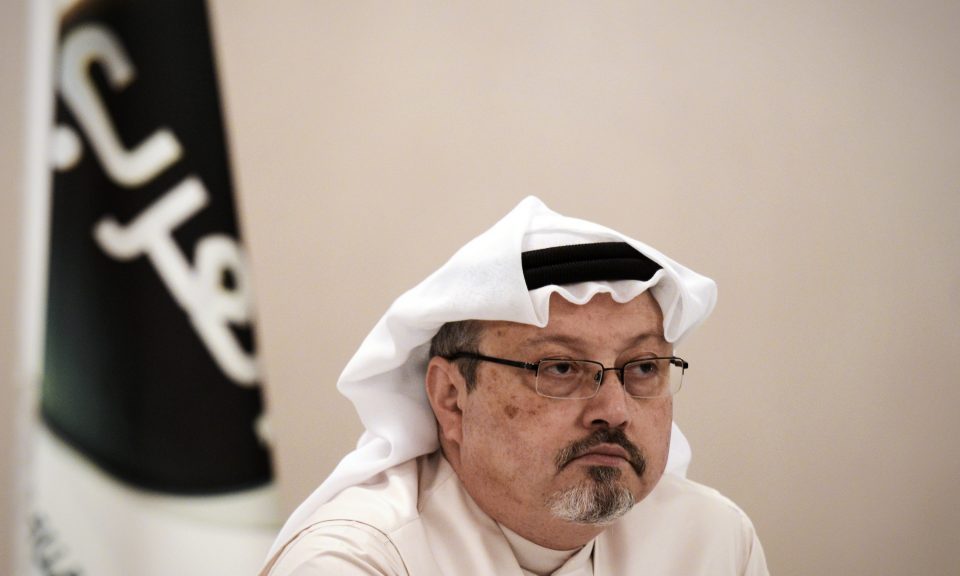 The slaying of Jamal Khashoggi has rocked the House of Saud and questions are still being asked about factors behind the incident and how it will affect the Middle East. 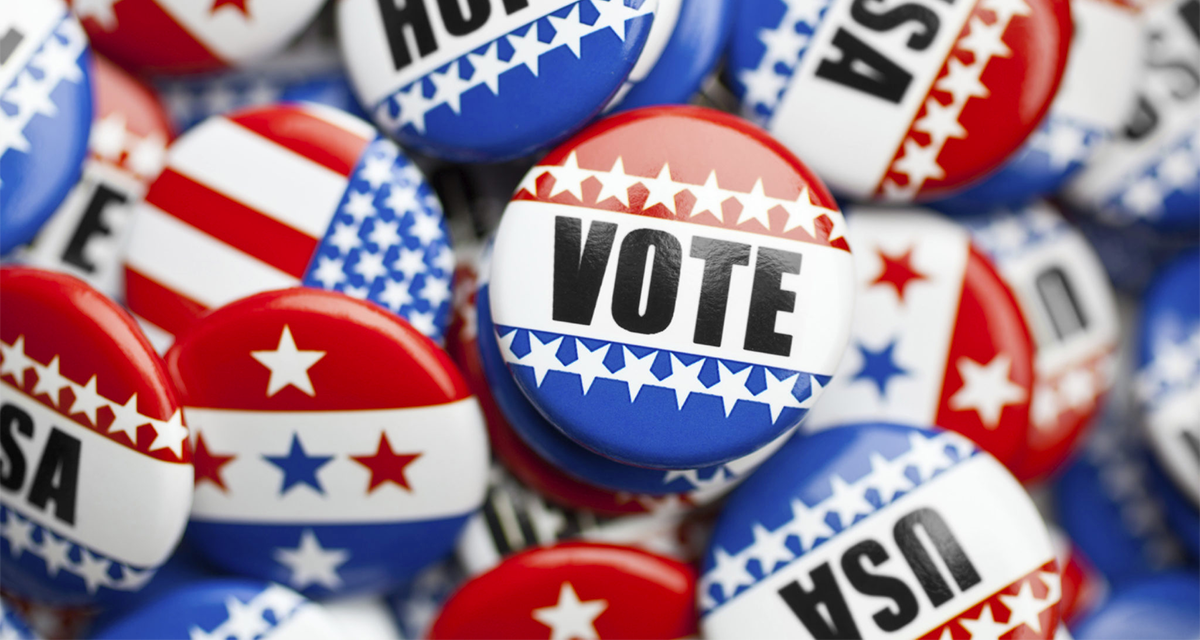 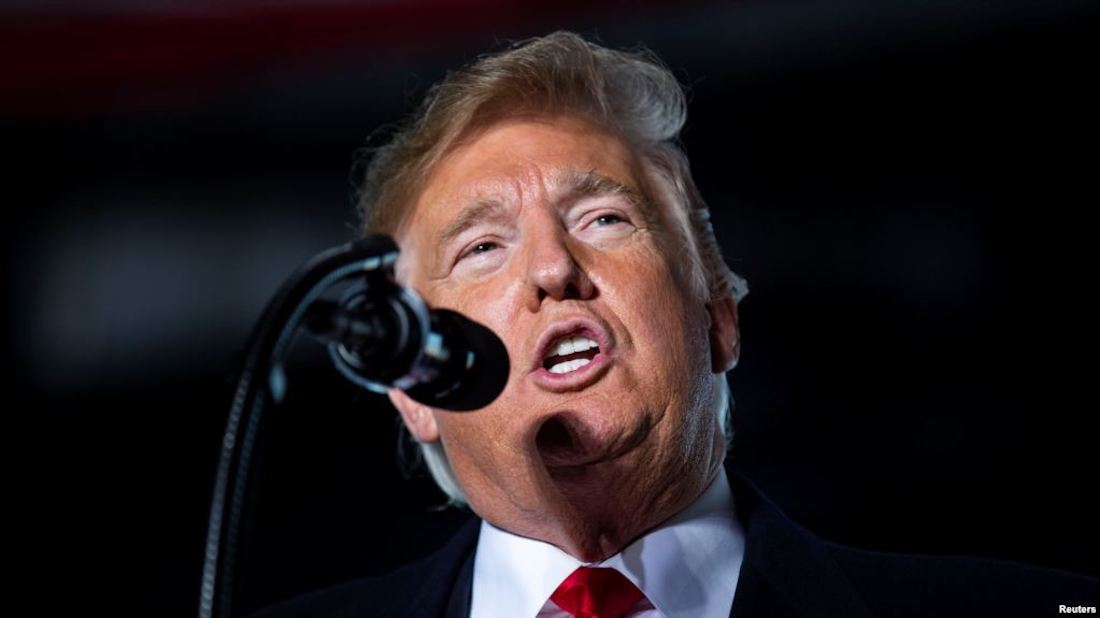 Donald Trump speaks at a rally in Murphysboro, Illinois, on October 27, 2018. 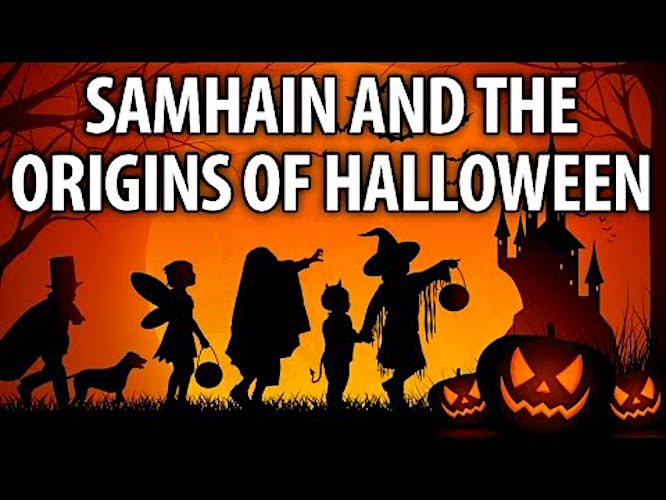 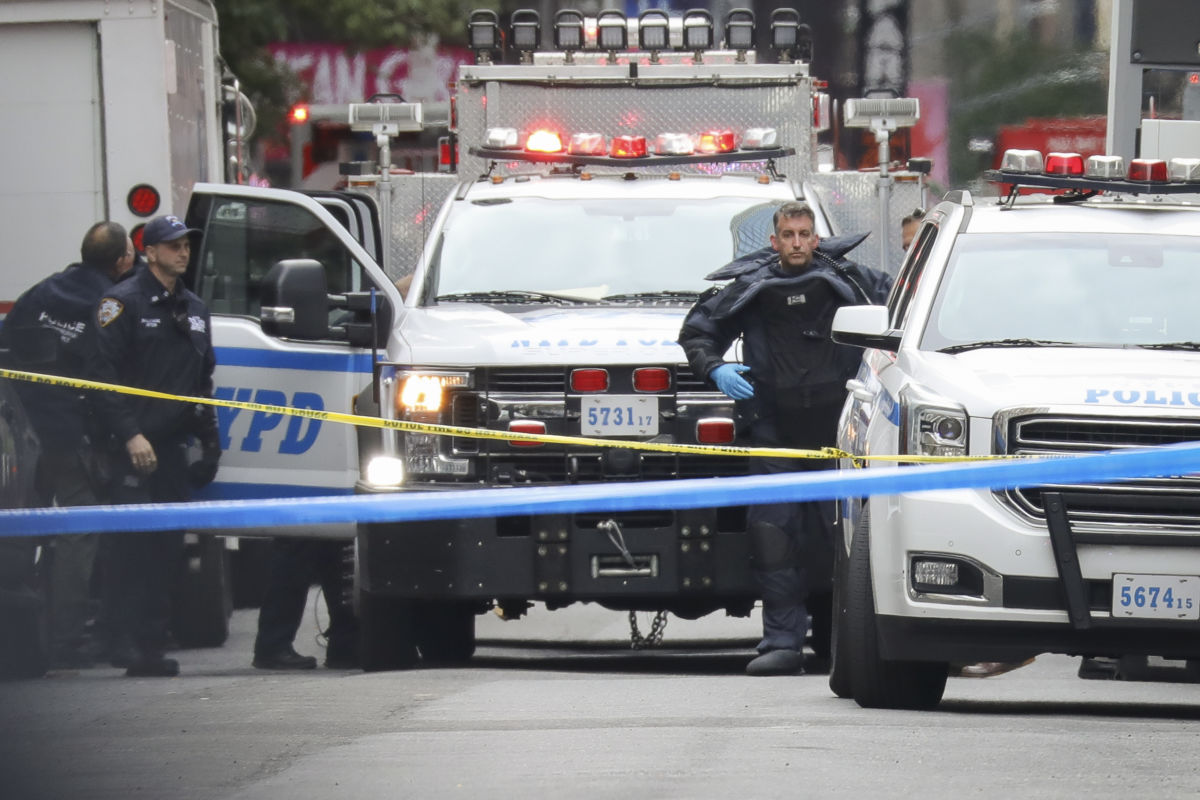 Law enforcement officials, including a bomb disposal technician, respond to a
suspicious package at a US Post Office facility on October 26, 2018, in New York City. 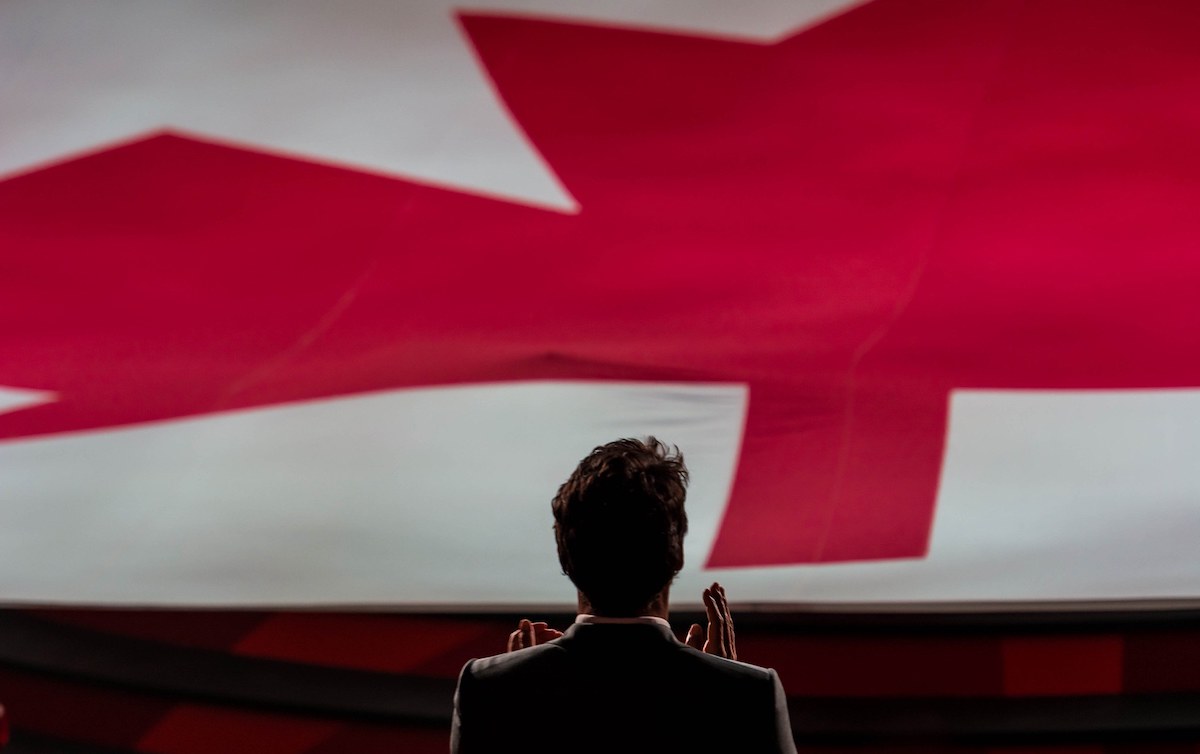 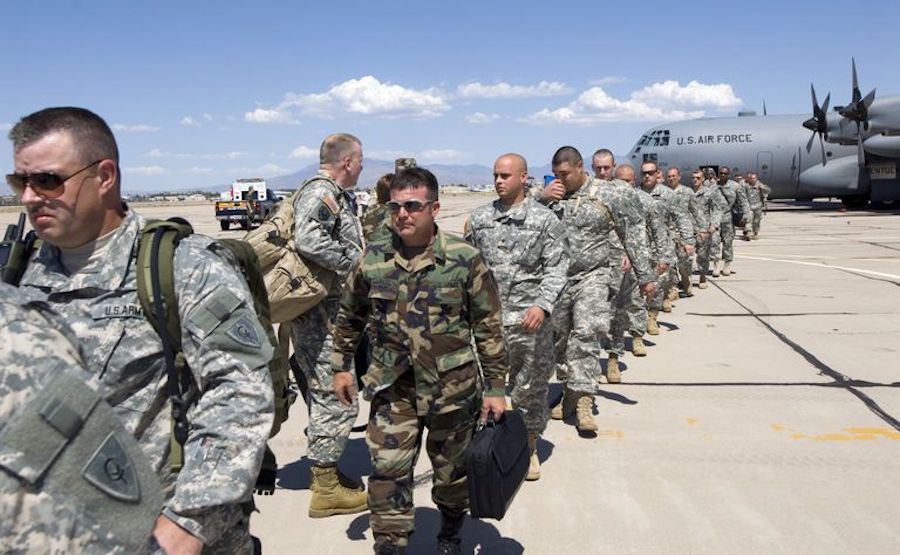 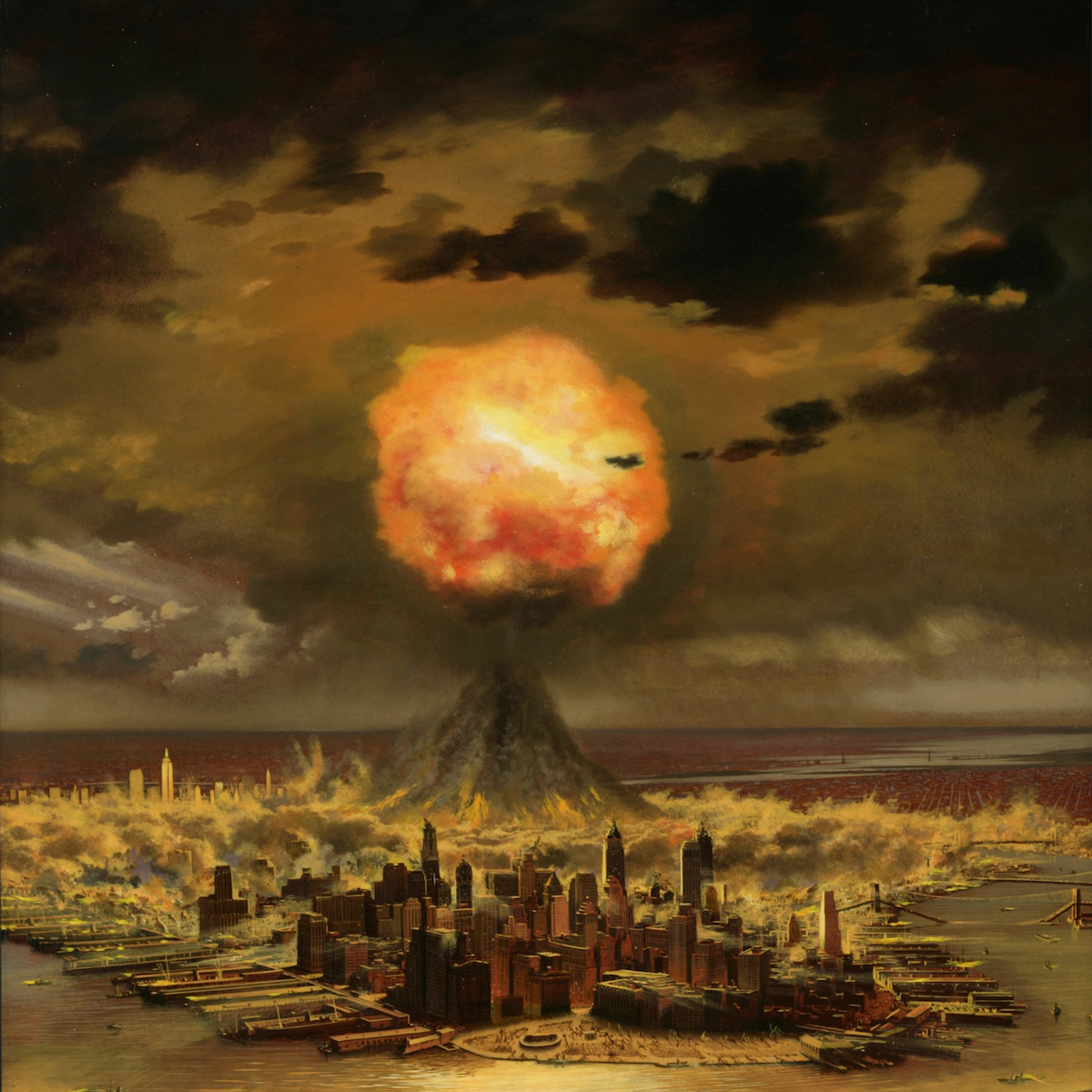 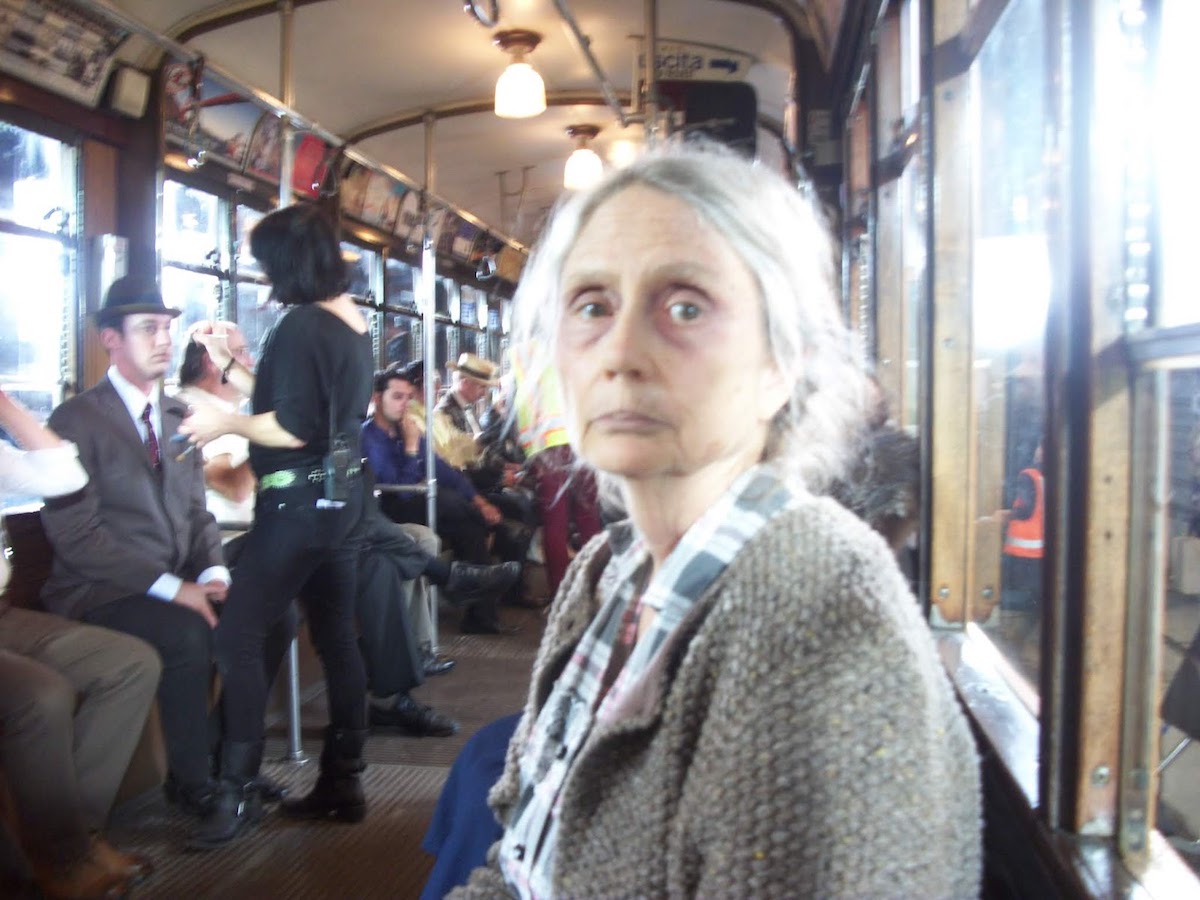 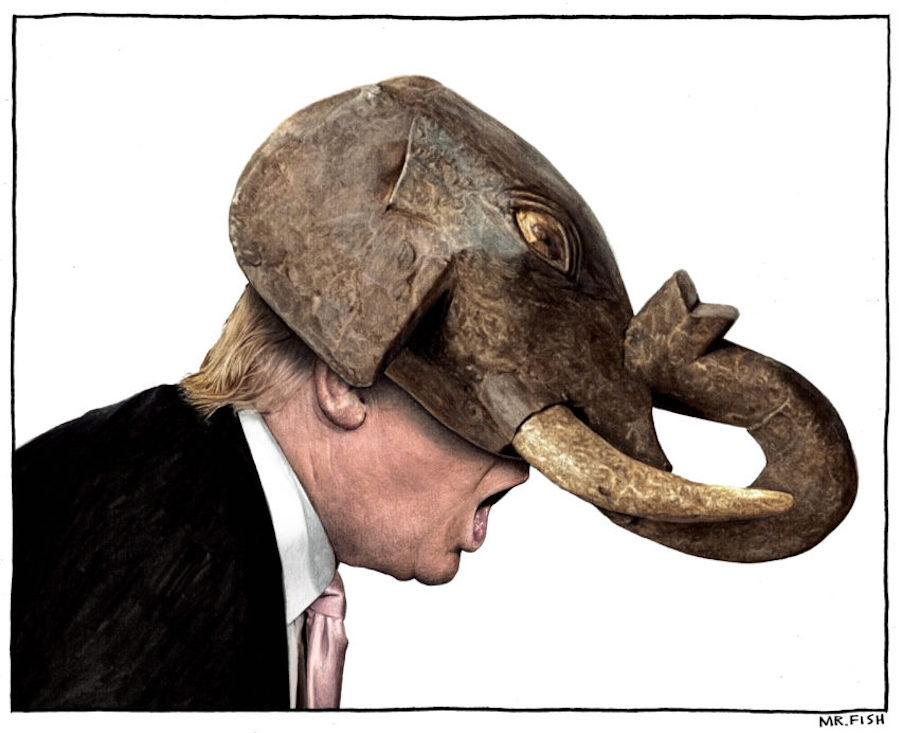 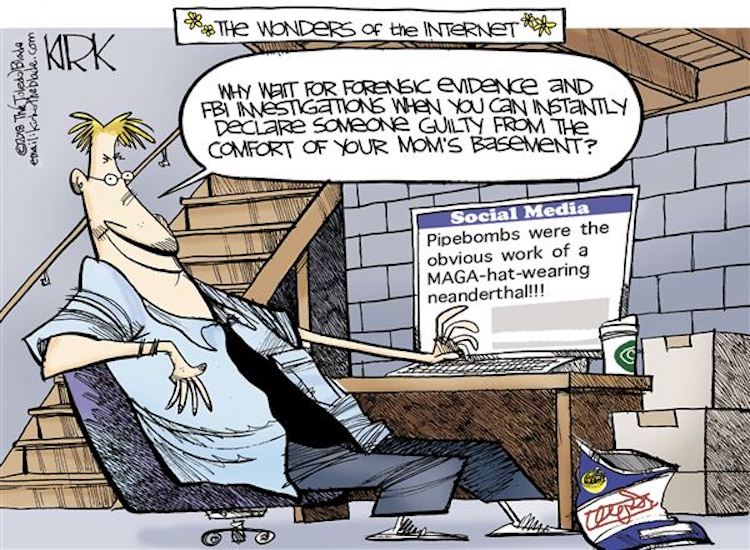 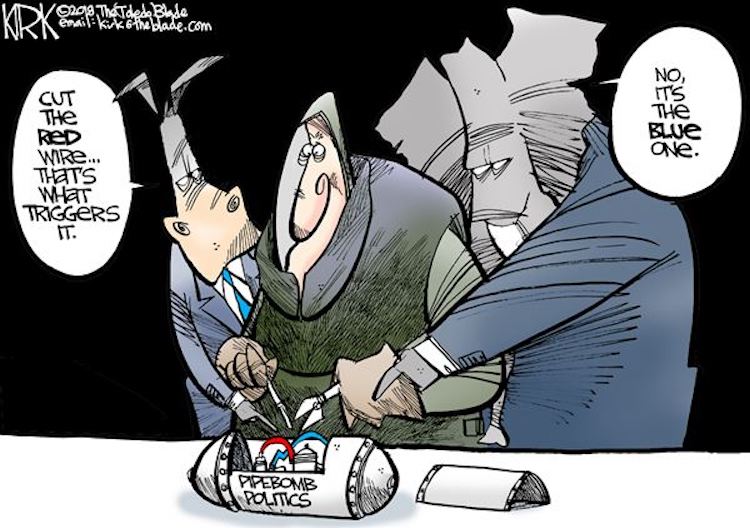 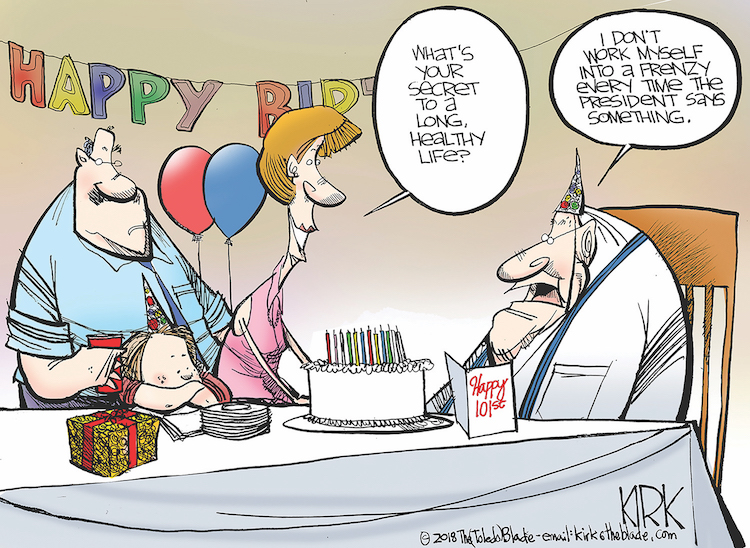 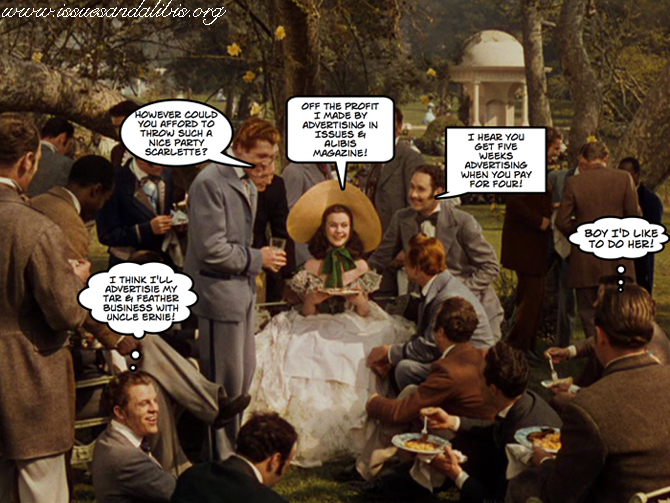